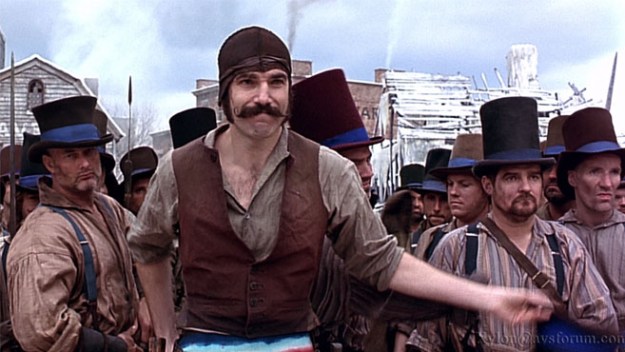 Catholics were the first to feel nativist nastiness: Bill ‘the Butcher’ and his Know-Nothing pals in ‘Gangs of New York’

First, a bit of pedantry.

My first boss in the newspaper business after college, Reid Ashe, was an MIT-trained engineer, which affected his approach to newspaper editing. A pet peeve for him was the improper use of the word “massive.” Something could be big, and imposing, and extensive, and impressive, but if it did not have actual mass, it was not massive.

I’m sure he would have hated this hed in The Washington Post this morning: “Donald Trump has a massive Catholic problem.” Well, no, he doesn’t, Reid would say. It may be “yuge,” but it is lacking entirely in mass.

After that bad start, it’s a pretty interesting story. Obviously, I’m far from the only Catholic who can’t imagine how anyone can morally justify backing Trump. As far as I knew before reading this, it was just me and the Pope. And some friends and family members, of course. But if I’d thought about it, I’d have assumed there were a lot of us.

Which there are. An excerpt:

Yes, the man who once feuded with the pope (how soon we forget that actually happened) is cratering among Catholics.

Back in 2012, GOP nominee Mitt Romney lost the Catholic vote by just 2 points, 50 percent to 48 percent. And the GOP has actually won the Catholic vote as recently as 2004 and in 5 of the last 11 presidential elections.

But Trump trails among Catholics by a huge margin. A new poll from the Public Religion Research Institute released this week shows him down 23 points, 55-32.

A Washington Post-ABC News poll released earlier this month painted an even worse picture for Trump’s Catholic support. He was down by 27 points, 61-34.

This is significant because Catholics make up a quarter of the electorate.

A number of reasons are offered for this, including the Donald’s tiff with the Pope. But the most convincing is the most obvious: Catholics — particularly Irish and Italians — were the very first targets of the nasty nativism that forms the core of Trump’s appeal. And they (I use “they” instead of “we” because I’m a convert, so this narrative forms no part of my personal heritage) haven’t forgotten.

These people’s descendants are unlikely to back you, Donald.

54 thoughts on “Trump’s huge, but not ‘massive,’ problem with Catholics”