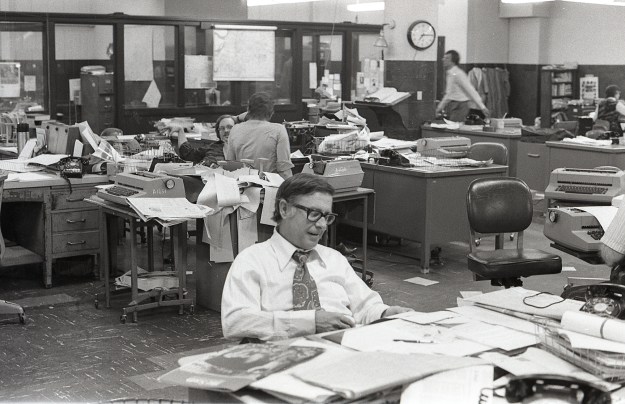 The sardonic Managing Editor Bill Sorrels presides at his desk in the middle of the newsroom (he had an office somewhere, too). He’s apparently reading one of the proofs I fetched. You see Dave Hampton striding in a blur across the room in the background. Note the go-to-hell decor — the unmatched linoleum, the rivers of proofs tumbling from spikes on the Metro Desk behind the M.E….

Having just wrestled with the new definitions of an old word, “reporter,” here are some images from the very start of my newspaper career, so very long ago. When reporters were reporters.

After I dug out those pictures from 1978 to go with this post, I started poring through some old negatives, thinking yet again about digitizing them (and again overwhelmed at the enormity of the task), when I ran across something I had forgotten existed.

Apparently, I took my camera to the paper one night during those several months I worked at my first newspaper job, back in 1974. I was a “copy clerk” at The Commercial Appeal in the spring and summer of that year, while a student at Memphis State University. That means I was a “copy boy,” with the title adjusted for the political correctness that was coming into fashion at the time (but which for the most part did not touch this newsroom). And indeed, we did briefly have one girl join us boys standing at the rail, ready to jump when someone called “copy.” 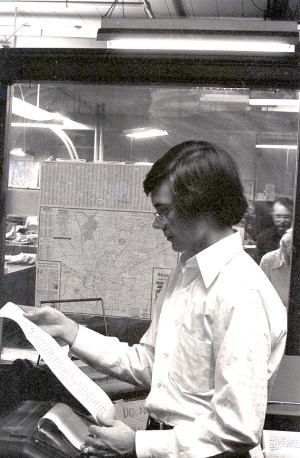 We were among the last copy boys in the country, since new technology was doing away with the need for someone to run around doing the stuff we did. Which meant reporters no longer had anyone to lord it over.

I just found these three exposures, found on one short strip of 35 mm film in a glassine envelope. I don’t know whether I took more, or where the rest of the roll is.

Anyway, I appeared to be documenting what I did at the paper by taking pictures of my friend and fellow copy clerk David Hampton doing the same tasks I did every night.

You can see Dave hurrying across the newsroom on an errand in the background of the photo at top, which shows one corner of the newsroom from the perspective of the managing editor’s desk. This part of the room is mostly deserted, with a reporter casually conversing with an assistant editor over on the Metro desk. This is 7:15 p.m., shortly after most of the day side people have left. The place would have been bustling about an hour earlier. Dave and I would be running for the next six or seven hours. (I wish I’d gotten a shot of the whole newsroom when it was full of people — but I probably would have been yelled at. That would not have been a novel experience, but I preferred to avoid it.)

In the foreground of the photo is the late Bill Sorrels, the managing editor, with a characteristic smirk on his face. I had him for a reporting class at Memphis State. His “teaching” technique consisted of telling stories from his reporting days, and stopping in mid-story to go around the room asking everyone, “So what did I do next?” and smirking when they got it wrong.

Bill would look over the galley proofs I brought him with that same expression, and then call out embarrassing critical remarks to reporters and editors about the mistakes they had made. (This was the kind of old-school place where grown men were chewed out and ground into the floor in front of everybody by their bosses.) The only actual work I ever remember seeing him do was on Aug. 9, 1974. He called me over and gave me a piece of paper on which he had scrawled, “Nixon Resigns.” He told me to take it to composing (on the next floor) and have it typeset in our biggest headline type (probably about 96 points), then have them shoot a picture of that and blow it up until it went all the way across the front page — then bring it to him to approve before they set it in metal and put it on the page. Probably the most “historic” thing I did in that job.

Above and at right, you see Dave in the wire room checking one of the 10 or 12 machines there that chugged out news from across the world non-stop — back in the days when ordinary people didn’t have access to such via Twitter, etc. We were the nursemaids to those machines, making sure the paper and ribbons never ran out, that they didn’t jam, and that the stories were ripped off the machines and taken to the editors who needed to see them.

Below, Dave is in the “morgue,” in later more polite times known as the “library,” where he’s been sent to fetch something, probably a photo, that someone needs to go with a story they’re working on. Given the size of the envelopes, these are probably mug shots, or maybe metal “cuts” that were already made to run in the paper previously. We saved those, when they were of repeat newsmakers, to save time and metal. They were uniformly 6 ems (picas) in width.

Another world. I never again worked in such an old-school environment. This was the old Commercial Appeal building, torn down decades ago. The long-defunct Memphis Press Scimitar was up on the fifth floor, if I recall correctly. Most news copy was still written, edited and processed in the old way — typed on manual typewriters, the pages strung together with rubber cement, edited with pencil, and set in metal type by noisy linotype machines up in the composing room. Once the type was set for each story, individual proofs would be pulled of each story, before they were placed on the “turtle” that held the full page — which we would run down to the newsroom. There was a lot of running back and forth.

This place was already an anachronism; it would have been completely recognizable to Ben Hecht’s characters in “The Front Page” It was what the makers of “Teacher’s Pet,” which I saw on Netflix the other night, were going for in the newsroom scenes. (Nick Adams played the copy boy in that film, itching for his shot at becoming a reporter. He was excited to get to write some obits one night. For us, the transitional job was to be the copy clerk who did the “agate” — rounding up police blotter, marriages and divorces, property transfers and other routine list-type copy and typing it up to go into the paper. I got to do that once, when another guy was out, and felt I had taken a huge step up.)

But new technology was creeping in. The non-news departments wrote on IBM Selectrics, and their copy was scanned and set in cold type, and pasted up on paper pages. And maybe some of the news copy as well — I see a Selectric behind Sorrels on the Metro desk. And a couple more on the rim of the copy desk at right.

It was also a crude, rough place that was about as non-PC as anyplace you could find in the ’70s. It’s ironic that they called us “copy clerks” instead of “boys,” because there were few other concessions to modern sensibilities. Culturally, every other newsroom I ever worked in was as removed from this one as though a couple of generations had passed. Although it was 1974, this newsroom would have been more at home in the first half of the century. It was… Runyonesque.

In the following decades, I didn’t miss this place, and was happy to work in a more civil environment. But I’m glad to have had this throwback experience; it gives me something to feel nostalgic about when I watch those old movies made before I was born. Yes, I say, it was just like that — those few months at the Commercial Appeal, anyway…. 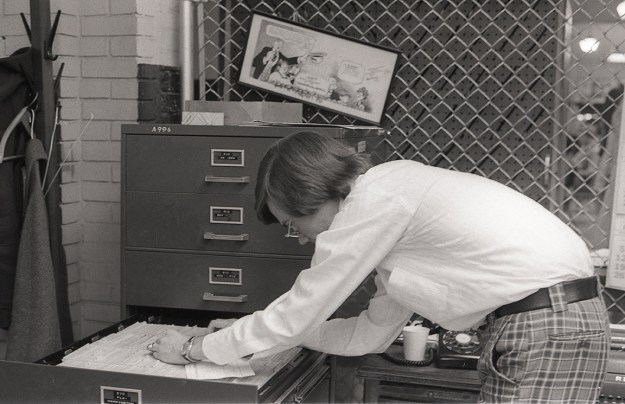 Dave, fetching a “cut” from the morgue.

21 thoughts on “What newsrooms used to look like, long, long ago”