On a previous post, Bud was complaining about Hillary’s “fainting spell” continuing to be a story three days later.

Well, first, it’s not a fainting spell. It’s pneumonia. She was warned by a doctor to rest, but she ignored it, went to an event sick and said stupid stuff about the opposition (“basket of deplorables”), then was seen collapsing leaving a big-deal public event.

All while trying to tough it out and keep the pneumonia a secret. Which is just too like her.

All of which made it more of a story than it might have been otherwise.

As for it continuing to be a story for days afterward — well, of course it is. Because now she IS resting, and not making new news to compete with it. What else is there to say about her right now?

You know what concerns me in this situation? That Trump is acting like a grownup and not talking about her health problem right now. He’s following the playbook and letting his opponent’s illness work against her without pulling the attention to himself. Instead, he’s sticking to complaining about the “deplorables” comment.

That shows discipline. Trump showing discipline worries me. Normally we could depend on him to blow the advantage of having his opponent out of action by saying stupid, horrible things about it.

He may still have supporters punching out 69-year-old women up in Asheville, but the loosest cannon on his ship — the captain himself — is restraining himself.

Oh, and to the helpful citizen who provided video of the grandma-punching incident (screenshot below): Turn your phone sideways! 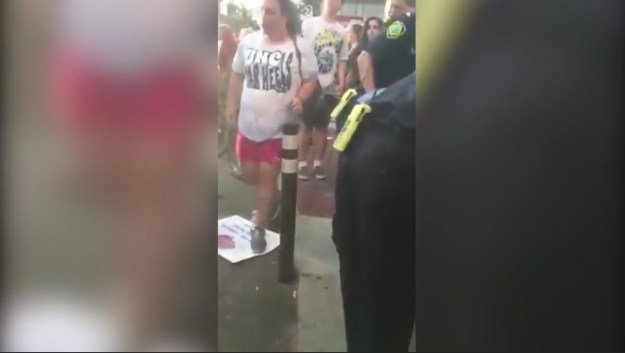 76 thoughts on “A restrained, disciplined Trump is scary”