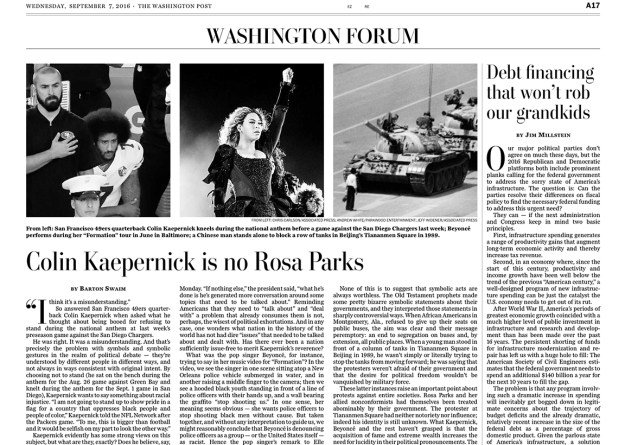 Columbia’s own Barton Swaim has yet another nationally published opinion piece out there, headlined “Kaepernick’s symbolism misses the point,” in The Washington Post today.

And unlike Kaepernick, Barton hits the mark.

You know how I’m always blathering about how I think street protests, among other unseemly forms of expression, are generally unhelpful? That’s what Barton’s on about. And the problem, as he identifies it, is imprecision. Quite right.

Noting that Kaepernick now protests that he was misunderstood, Barton writes:

He was right. It was a misunderstanding. And that’s precisely the problem with symbols and symbolic gestures in the realm of political debate — they’re understood by different people in different ways, and not always in ways consistent with original intent. By choosing not to stand (he sat on the bench during the anthem for the Aug. 26 game against Green Bay and knelt during the anthem for the Sept. 1 game in San Diego), Kaepernick wants to say something about racial injustice. “I am not going to stand up to show pride in a flag for a country that oppresses black people and people of color,” Kaepernick told the NFL Network after the Packers game. “To me, this is bigger than football and it would be selfish on my part to look the other way.”

Kaepernick evidently has some strong views on this subject, but what are they, exactly? Does he believe, say, that most Americans are racists? That most police officers target African Americans for harassment? That the United States as a whole deliberately and systematically persecutes African Americans? Somehow I doubt he would agree with any of these things without qualification — and yet they are all rational inferences from his refusal to honor the flag of a “country that oppresses black people and people of color.”…

Indeed. Barton is a wordsmith, and seems to share my horror at the thought of expressing oneself without being specific and explanatory.

And yet we are surrounded by people doing precisely that, from tattoos to grand public gestures. Harrumph.

In an age when there is no barrier to blogging, for instance, there is no excuse for failing to explain oneself — especially when one has done something that shouts only one thing clearly: “Look at me!”

As young mothers tell toddlers, use your words.

When pressed further to explain his views after the Chargers game, he wasn’t helpful. What was he trying to convey? “The message is that we have a lot of issues in this country that we need to deal with. We have a lot of people that are oppressed. We have a lot of people that aren’t treated equally, aren’t given equal opportunities. Police brutality is a huge thing that needs to be addressed. There are a lot of issues that need to be talked about, need to be brought to life, and we need to fix those.” President Obama reinforced that message on Monday. “If nothing else,” the president said, “what he’s done is he’s generated more conversation around some topics that need to be talked about.” Reminding Americans that they need to “talk about” and “deal with” a problem that already consumes them is not, perhaps, the wisest of political exhortations. And in any case, one wonders what nation in the history of the world has not had dire “issues” that needed to be talked about and dealt with. Has there ever been a nation sufficiently issue-free to merit Kaepernick’s reverence?

I call your attention in particular to this bit: “Reminding Americans that they need to ‘talk about’ and ‘deal with’ a problem that already consumes them is not, perhaps, the wisest of political exhortations.”

I’ve been told for all my adult life that we need to “talk” about race in America. And you know me; I have generally obliged without hesitation. I can talk all day and all night about such a thing, and on occasion can even bring myself to listen.

But I bring the point up now because, right after reading Barton’s piece this morning, I saw this other opinion item in the Post, headlined, “It’s time to stop talking about racism with white people.” Excerpts:

Why are we losing solid hours out of our day, wearing our fingertips numb on keyboards and touch screens in an attempt to explain to some dense dude-bro why “All lives matter” is a messed up and functionally redundant response to “Black lives matter”?…

If Colin Kaepernik’s decision to stand against social injustice by sitting during the National Anthem has shown us anything else, it’s that much of white America is more bothered by our methods of protest than they ever will be about the injustices we’re protesting. Let’s dispel the notion that if we only protested better, white people will miraculously become more receptive of our message and less scornful of our audacity in speaking out….

Black people, it is long past time for us to start practicing self-care. And if that means completely disengaging with white America altogether, then so be it….

Zack Linly seems to have given up on making himself understood at a fairly early age (I’m going more by the way he expresses himself in seeing him as young, but for all I know he could be as old as Brett Bursey). Which is sad. Because as Barton suggests — even though he, too, seems a bit weary of the conversation, we need to communicate better about these things.

But there’s hope! Mr. Linly and Mr. Swaim seem to have some promising common ground, judging by the cover photo the former chose for his Facebook page. They both have a sense of the futility of some street action. But then, I could be misunderstanding this message, too… 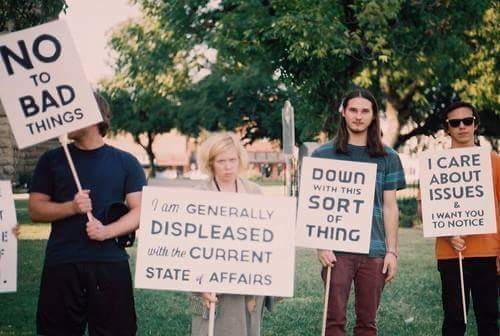