Donald Trump mocks Elizabeth Warren by calling her “Pocahontas.” Not a classy move on his part on a number of levels, although she did sort of ask for it by claiming to be an American Indian when she had no proof that she was.

Nor can I make such a claim. Despite extensive work on my family tree, I’ve found nothing to contradict the finding from a DNA analysis one of my daughters sent off for, which among many other things said we had, alas, zero Native Americans in our genetic background. (She initially doubted the results when they showed extensive Scandinavian involvement, but I’ve since corroborated that in my work on the family tree. Vikings, you see.)

But, while I’m not blood kin, Pocahontas herself — a.k.a. Matoaka, a.k.a. Amonute, a.k.a. Rebecca Rolfe — is now in my family tree! This will no doubt cause Sen. Warren to turn green with envy, and prompt Donald Trump to start calling me “Powhatan” (which would be inaccurate, but do you think that would stop him?). Were he to take note of me, that is, which I hope he doesn’t. 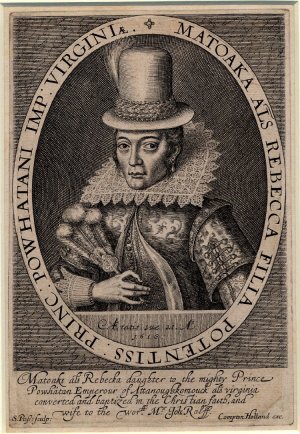 To show how I got there, I should probably first share with you how I got back to that era of history. You may not want me to, but I did all this work, so I’m going to share it anyway.

Some time ago, my mother said she had heard we may be related to Richard Pace, who is famous for having warned the settlers of Jamestown of an impending Indian attack.

Mom had heard about the possible connection from one of her first cousins, and after he called me showing interest in what I had found, I sent him the following simplified description of how we get back to the hero Richard Pace.

A note about my methods, which would no doubt draw scornful laughter from historians and professional genealogists. I do this for fun, using resources at my fingertips. I don’t establish these connections by rooting through musty archives for physical documents, which would no doubt play Old Harry with my allergies. I Google, and I root around in the many extensive genealogy databases out there — the ones that don’t charge for the privilege (my tree resides on Ancestry.com, which allows me to build it for free; I don’t plan to start paying until I run out of easy free connections) — until I find a connection, and then proceed from that. Some of what I find is contradictory, so I hunt further until I’ve resolved the contradiction, at least to my own satisfaction as a restless hunter eager to move on. When I find two birth dates for the same person, I choose the more reasonable one and add “circa.”

The search for Richard Pace was unusual in that I was trying to get to him. Usually, I just find whomever I find, searching backwards in time. Deliberately trying to connect to someone can be problematic — the first time I did it, as noted below, I ignored some glaring discrepancies to get there. I believe I have it on more solid ground now.

In any case, here’s what I sent my first cousin once removed. Note that I start with my great-grandfather (and his grandfather) Charles Lexington Pace, who was an undertaker in Marion, since we’re both well familiar with him:

Bill,
I’m sorry to take so long to get back to you. Shortly after we spoke, I went to look at the family tree, intending to describe to you our connection to Richard Pace, and I discovered a major error.
We have several ancestors named George Pace. One was born about 1765. My error was that I had put someone down as his father who, going by the dates, could not possibly be his father. That called into question the entire connection to Richard Pace of Jamestown.
So I had to wait until I had some time to meticulously go back and figure out where my mistake was. I still don’t know why it happened, but GOOD NEWS: After some hours of web surfing, I’ve established that we probably still are directly descended from Richard Pace.
I say “probably” because I have no physical documents proving it. All I have is statements on web databases that Person A was the son of Person B, and so forth. Some of this stuff seems shaky, and who knows for sure after all these generations?
But most of these connections make sense. There is only one generation where it seems a little doubtful, but I think that’s because we aren’t sure of their birthdates. I have George Pace (grandfather of the other George Pace) being born in 1702, but his son William being born “about 1716,” when George was only 14. Worse, I have William’s mother — George’s wife, Obedience Strickland Pace — being born “about 1715” — just one year before her son! But I’m assuming that since both dates say “circa” before the dates (which ancestry.com changes to “about” when I enter it), then Obedience was likely born several years earlier, and her son William several years later.
There’s plenty of reason to believe William was born quite a few years later, since his son, the younger George, wasn’t born until 1765. (Maybe. Another source gives a wide range of possible dates for him.)
Anyway, here’s what I have, starting from Papa Pace and going back in time, from son to father to grandfather, etc. If you click on the names, they will take you to web pages where I got some of the information. A lot of these come from the Geni.com database, but some of the more recent are from other sources:
Charles Lexington Pace, born 1871
Charles L. Pace, born 1831
Richard Pace, born about 1793
George Pace, born 1765 — another source says “estimated between 1723 and 1783” (he was originally from Virginia or NC, and was the first to move to SC)
William Pace, about 1716 (a shaky approximation, based on when his parents were born)
George Pace, 1702
James Knowles Pace Sr., about 1666
Richard Pace II, about 1636
George Pace, about 1609 (born in England — his father apparently brought him to Virginia)
Richard Pace Jr., about 1580
THAT Richard Pace, born around 1580, is the famous one who saved the settlers at Jamestown. Here’s a Wikipedia page about him, which mentions his descendants George and Richard II.
I’ve continued to poke around in what’s available on the Web, and the earliest possible Pace ancestor I’ve found is a man named Peter Pacey, who was probably born in the early 1400s. (My source says “estimated between 1390 and 1450,” which is a pretty wide range, but not all that unusual with this kind of data.)
I hope you enjoy looking over all this material. Let me know if you have anything good to share back with me. It’s always good to have more information…

Oh, as to Richard Pace’s role at Jamestown, here’s his Wikipedia page. His warning to the governor apparently saved Jamestown, but not the settlers in surrounding areas. Many were killed, including some other direct ancestors of ours — the parents of the wife of Richard’s son, George. 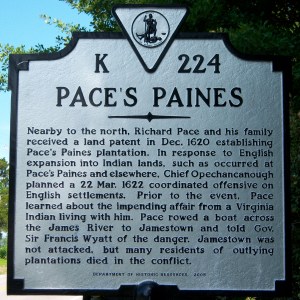 This historical marker in Surry County, Virginia, tells some of my ancestor’s story.

It was in researching more about that couple who died in the attack — the Rev. Samuel Maycock and his wife, the former Mary Pierce — that I found my way to Pocahontas.

Mary Pierce had a sister named Jane, who was born in 1605 in Heacham, England and died in Virginia in 1635. I don’t always bother with siblings of direct ancestors, but in this case I did, and was rewarded with a fun fact:

Jane Pierce married John Rolfe, with whom you are probably familiar. Jane was his third wife. His first wife was Sarah Hacker. His second, who died in 1617 back in England, was Pocahontas. Thereby making her, as Ancestry succinctly puts it, my “wife of husband of 11th great-aunt.”

Stuff like this is what makes genealogy fun, which is what causes me to spend a ridiculous portion of my weekends doing it.

Now that I’m back in this part of the tree, I’m going to go back a couple of generations and try again to nail down my connection to John Pace, who served as jester to King Henry VIII and his daughter Elizabeth I. Wikipedia says he was “probably a nephew of English diplomat Richard Pace.” That Richard Pace was my 13th-great-grandfather, if my information is accurate. He had a brother named Thomas, but I can’t find any indication that John the Fool was his son.

But while I haven’t been able to prove the connection, which I would love to do, history — that is to say, Francis Bacon — does record a couple of his jokes. The first one doesn’t make sense to my modern ear. Here’s the second:

‘Pace the bitter fool was not suffered to come at the Queen because of his bitter humour. Yet at one time some persuaded the Queen that he should come to her; undertaking for him that he should keep compass. So he was brought to her, and the Queen said: “Come on, Pace; now we shall hear of our faults.” Saith Pace: “I do not use to talk of that that all the town talks of.”’

I’ll pause until you’ve stopped laughing. If Comedy Central had material like this, they wouldn’t be mourning the departure of Jon Stewart so.

He may have been called a “bitter fool,” but I think ol’ Uncle John was a caution. After all, I’ve been accused of much the same failing myself. 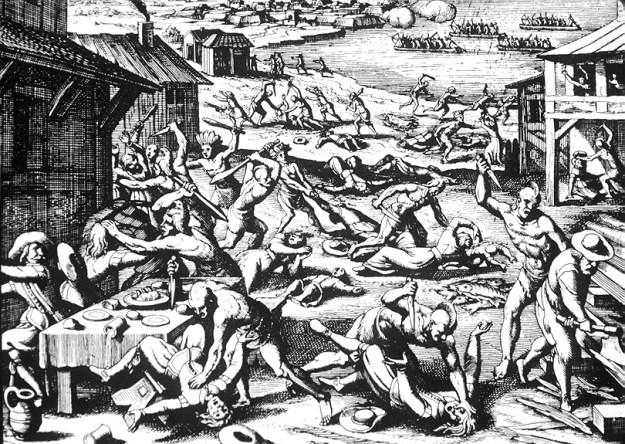 A 1628 woodcut supposedly depicting the Indian attack of 1622, from which Jamestown was spared due to intel obtained by my ancestor, Richard Pace.

13 thoughts on “My Pocahontas connection: Eat your heart out, Elizabeth Warren!”