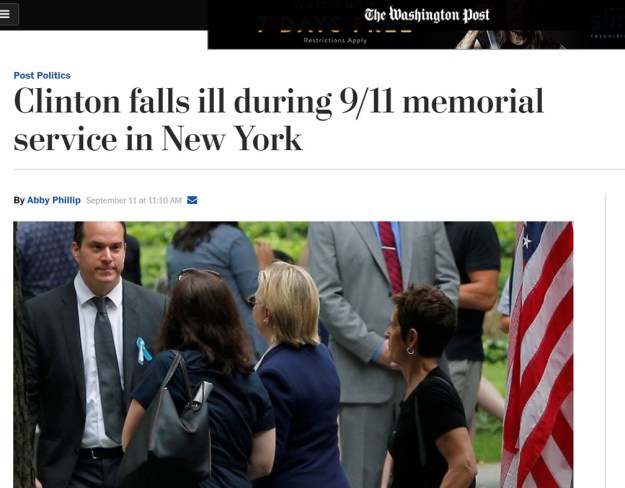 In the last couple of days, we’ve seen two things happen that illustrate just how fragile Hillary Clinton’s lead over Donald Trump is — a fact that leaves our nation suspended by a hair over disaster.

And today, we have this:

Hillary Clinton left a New York memorial service marking the 15th anniversary of the Sept. 11 attacks early after feeling “overheated,” according to a campaign spokesman.

“Secretary Clinton attended the September 11th Commemoration Ceremony for just an hour and thirty minutes this morning to pay her respects and greet some of the families of the fallen,” spokesman Nick Merrill said. “During the ceremony, she felt overheated, so departed to go to her daughter’s apartment and is feeling much better.”

Clinton arrived at the memorial at 8:18 am and greeted Sen. Joe Manchin (D-W.Va.) and his wife as she exited her van, according to the pool.

Reporters traveling with Clinton became aware about 9:36 a.m that she was no longer in the place where she had been standing. By 9:48 a.m., her campaign confirmed that Clinton left the viewing area as early as 9:30 a.m.

Clinton’s daughter lives on East 26th Street, in the Gramercy neighborhood of lower Manhattan — about a 15-minute drive from Ground Zero….

The headline of that snippet, which will become a full-fleshed news story over the next hour or so, begins “Clinton falls ill…”

Here we go. Granny’s had a spell, and we will all stop remembering 9/11 and start talking about the fact that she’s a granny — and do we want Granny running the country?

Never mind that the woman has way more stamina than most of us. She wouldn’t be where she is otherwise.

While I may go on about nagging health problems here on the blog from time to time, I’m actually in pretty good shape. My blood pressure and pulse always draw remarks of approval from health care professionals. I have zero signs of heart disease, my cholesterol is OK, all major organ functions are nominal, in the astronaut sense of the word.

But I’m not perfect. For the past week, I’ve been getting these sinus headaches that I think are related to a minor cold that my grandson brought home to my wife from 4K. They start in the late morning, and by the end of the day, all I want to do is lie down and make it go away. On Friday, while everyone else at ADCO was at lunch, I lay down on the carpet of my office with my head resting on a rolled-up sweater for about 10 minutes, and got up feeling renewed for the rest of the day.

If I were a presidential candidate, and someone had seen me do that, the headlines would be “Warthen collapses on campaign trail” or some such. Everyone would be going on about my “spell” and what it said about my fitness for office.

And maybe I wouldn’t have the stamina for such a job. Most of us wouldn’t. Look at how it’s aged Obama.

But Hillary Clinton? The woman’s been running full-tilt for president for a quarter-century now. After this, the presidency itself should be breeze. She can take naps, like Reagan.

I’m not terribly concerned about Hillary Clinton’s health one way or the other. What I am concerned about is that she’s running against the least-qualified, most appalling man ever to win a major party’s nomination, and it’s so close that something like this could lose it for her.

That’s what worries me.

A couple of days back, I meant to write something about this story, which was written, I should note, before both the “basket of deplorables” remark and the “overheating” spell: “Democrats wonder and worry: Why isn’t Clinton far ahead of Trump?”

As well they might. For my part, I don’t wonder. I can see the things Democrats are blind to.

56 thoughts on “Here we go with Hillary’s ‘health issue’”