As we know, the Obama administration’s guiding principle in dealing with the world is “Don’t Do Stupid (Stuff).”

Which, unfortunately, is the sort of mindset that can lead to not doing “stuff,” period, even when you really, really ought to.

So I’m pleased when I see us going out and taking action when it’s called for. Such as in this instance: 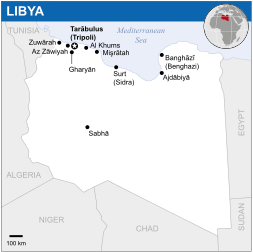 In May, when the fighters struck a mile from the lightly guarded desert facility, killing two security officers at a checkpoint, they decided it was time to act.

The Islamic State’s encroachment on an installation outside the remote oasis town of Waddan, where 500 metric tons of ­chemical-weapon precursor materials were stored, set off a hurried chain of events culminating in a disarmament operation involving the United States, European countries and the United Nations.

The international effort, which concluded last week when a Danish ship unloaded the materials at a German port for destruction, is one of the rare successes that Western nations can claim in Libya since dictator Moammar Gaddafi’s ouster in 2011 pitched the North African country into lawlessness and civil war….

Well, I’m glad to hear that.

I hope even my more isolationist friends can agree that it’s a very good idea to do such stuff as this, and that we ought to in the future whenever something as obvious as this presents itself.