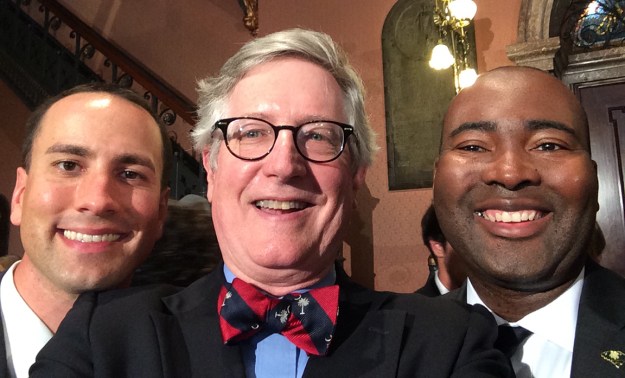 Matt, me and Jaime, on the day the legislation was signed to get the Confederate flag off the State House grounds.

You might say “heroes” is a tad strong, but I wanted to draw you in and get you to read this, and both of these young men really do deserve a rather hearty pat on the back.

This is especially remarkable since y’all know how much I despise both parties, and Matt and Jaime are, respectively, the chairmen of the Republican and Democratic parties in South Carolina.

But they are remarkably free of many of the most objectionable characteristics associated with being party chairmen in the 21st century.

To begin with, rather than being enemies who reflexively spit on the ground whenever each other’s names are mentioned, they are buds. CNN noted this in a piece back in February — the month of the presidential primaries here — headlined, “Odd Couple: How a Republican and a Democrat became friends in South Carolina.”

The AP’s Meg Kinnard followed up this month with a piece headlined “South Carolina party chairs beat vitriol with friendship.”

And you’ll recall when I celebrated their unanimity on the day the legislation to bring down the Confederate flag was signed. See the above photo.

But there are additional reasons to applaud these guys.

Back to how much I despise parties… I’m not going to go into all the reasons I do, but let’s look at two biggies — two things that have done more to make the parties into destructive forces in our republic than any other. Particularly the first one:

Knowing how much I despise those things, imagine how pleased I was to find Jaime and Matt speaking out against both of them.

Particularly the way reapportionment is done.

From a recent story by The State’s Jamie Self:

One way to make S.C. races more competitive, Moore and Harrison say, is to end lawmakers’ control over the process of drawing district lines.

The GOP and Democratic party leaders suggest a nonpartisan or bipartisan panel draw district lines, instead of lawmakers.

Massey, R-Edgefield, said convincing lawmakers to cede their influence over the redistricting process – and their political futures – would be a heavy lift. Even he would be “reluctant to give up that authority to an outside group.”

But Massey said he would support ending straight-party voting.

“I don’t think it’s too much to ask people to take 30 seconds to push all the buttons,” he said. But, he added, there will be “partisans on both sides that are going to go ballistic over that if you try to change it.”

Yes, they would. As they would totally freak out over reapportionment reform. There is probably nothing that incumbents will fight harder to hang onto than their enormously destructive power to draw district lines so as to choose their voters, rather than letting the voters choose their representatives.

But that makes me appreciate all the more Matt’s and Jaime’s willingness to take a stand on this.

Jamie’s story also delved into the evil of straight-party voting. The story wasn’t as clear in terms of communicating what the party chairs think of that, so I contacted them both yesterday to find out.

I reached Mr. Harrison via email, asking whether he was willing to take a stand against straight-ticket voting. He responded, “Personally yes… It isn’t the stance of the party, because the issue hasn’t come up for a party position.  Nonetheless, I personally believe that is one of the many reforms we need.”

Amen. Later in the day I reached Matt Moore by phone and posed the same question. I didn’t ask for an official party position, but just asked whether he, Matt Moore, would take a stand.

And he did. There’s no proposal currently before lawmakers, but “in theory, I am for doing away with it.” He sees a need for “more informed voters,” and doing away with the straight-ticket copout would certainly be a way to demand more more knowledge, more attention, from voters.

We also chatted a bit about reapportionment, and it was along the lines of what he said about it in Jamie’s story:

Moore said he is glad his party controls the state Legislature, but the way district lines are drawn is taking its toll on the GOP nationally.

“It’s led to Republicans being in control of Congress, but being unsuccessful in presidential elections,” Moore said, adding the GOP’s difficulty in appealing to minority and younger voters stems from its candidates not having to campaign for their votes at home.

More competitive districts “would force candidates to go out and talk to people who don’t look like them.”…

And wouldn’t that be something wonderful? Lawmakers paying attention to everyone in their communities, rather than the narrow constituencies they’ve carved out for themselves through reapportionment.

I firmly believe it would cure a great deal of what ails our politics today.

And while it’s not a concrete step, I think it’s a great first step to have the chairs of both parties willing to talk about the need for change, rather than defending the intolerable status quo.

35 thoughts on “Jaime Harrison and Matt Moore are my heroes”