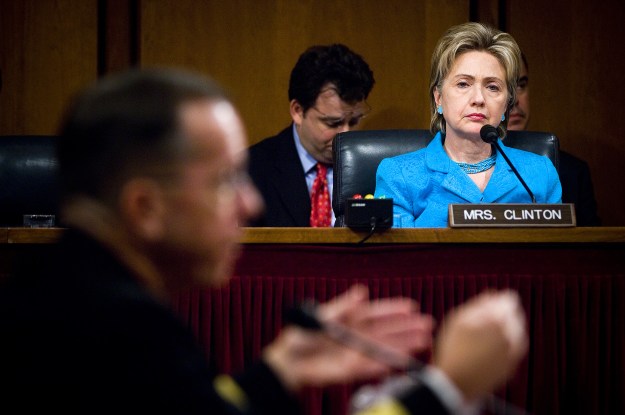 This might be the suit she was wearing in the dream. Only more disheveled…

I haven’t done one of my special “what’s wrong with Brad?” dream-journal posts in years now, so this seems like as good a time as any to dust off the category.

Let me share with you the Hillary Clinton dream I had last night.

It was… typically weird. And confusing…

I was walking down the street in some town that I think was someplace where I used to live and work, perhaps a variation on Jackson, Tennessee. I crossed a street, stepped up and started walking along a sidewalk. The sidewalk was covered, like in a western movie or a situation where there’s living quarters over a shop and the upstairs projects out over the sidewalk.

Anyway, immediately someone is walking my way on the sidewalk, and it’s Hillary Clinton. And she’s not looking good. Her hair is disheveled as though she had just been in a high wind. Her light blue pantsuit is rumpled as though she had slept in it. She looks horribly exhausted, even dazed. She’s staring straight ahead and sort of staggering, and isn’t looking at me.

We’re about to pass each other, and I feel like the civil thing is to say something, but I can’t decide how to address her. I’m not going to say “Hey, Hillary.” I consider, “Hello, Madame Secretary,” but I’m considering, “Sen. Clinton.”

I can’t decide, and she’s right alongside me, so I make myself say something, and it comes out as “Hey… uh…”

She continues staring ahead, but after a second she acknowledges me with a grunt that is if anything less articulate than what I had said. It sounds sort of like “Hmmph!”

So… brilliant interview, right? But I don’t want to chase after her and try to have a real conversation, because it looks like she’s having a bad enough day already. So I continue on, and enter a place that seems to be a sort of restaurant and bar. The proprietress walks up and greets me, and… it’s Hillary Clinton.

Except, for whatever reason, I don’t realize that’s who it is until later. She looks exactly like herself, except she looks younger, fitter, more energetic. Her hair is longer and she has it held back with a band, like in this picture.

This Hillary is, unlike the other, having a good day. She has a prosperous business; things are going well and she’s brimming with confidence. We seem to know each other. We start to chat, and I immediately tell her who I just ran into. And I describe how the Hillary I had run into didn’t look good; she seemed all worn out.

Hillary Two starts to walk away from me to deal with a customer or something, but says to me as she’s leaving, “I’m not at all surprised.”

I say, “What do you mean? Do you say that because of her recent bout with pneumonia?”

The woman looks back and with a sarcastic smirk says “Yeah, right — that’s what I meant,” in a way that communicates she meant something else entirely, and I should know what that was.

I turn and leave, thinking I’ve just picked up on a hell of a good news story — for some reason, the two exchanges seem fraught with meaning — and I’d better head back to the paper and write it. (Along the way, I fret about whether all that was on the record, and I decide it was.) I’m not sure what paper that was, but as I walk into the newsroom and pass the conference room where the editor’s meeting is being held, I see Bobby Hitt is presiding (which would place it at The State between 1988 and 1990). Only I’m not in the meeting, which tells me I’m a writer and not an editor, which is a bit odd. (In my 35-year newspaper career, I was only a reporter for a little over two years, very early on. The rest of the time I was an editor.)

I’m looking for a place to start writing — I need to produce a budget line ASAP (it should have been in before the editors’ meeting, but I know this will be a welcome late addition to the budget) — and all I see near me is manual typewriters of a vintage that places them decades before this picture of the first newsroom I worked in. Like something Ring Lardner would have typed on. I notice, though, that elsewhere there are terminals of the sort we used in the mainframe days of the ’80s and early ’90s, so I head toward one of those, wondering if I can remember my login from way back then. As I do, I pass by a TV that’s playing an old movie about newspapers, and in it a crochety old character actor is saying that computers will be the death of newspapers, just mark his words…

As I go looking for an unoccupied terminal, I run into an editor whom I decide should be briefed on the story. So I start telling it to him, and when I get to the part about the restaurant proprietress, I’m thinking this is someone everybody at the paper knows, but I’m blanking on her name. I’m saying, “You know, that woman who runs that place that I know you know, oh, what’s her name…?”

At that moment, I suddenly realize that she was Hillary Clinton, too. Hits me like a ton of bricks, and stops me cold as I wonder how I could not have realized that. And I’m wondering what this new wrinkle does to my story.

And the dream kind of ends there.

If you can find any meaning in it, congratulations…