I frequently have ideas for blog posts during Mass on Sunday, and then I promptly go home and take a nap or something and then get busy with other stuff on Monday and forget about it.

Which I shouldn’t do because, you know, He’s not the kind you have to wind up on Sunday. 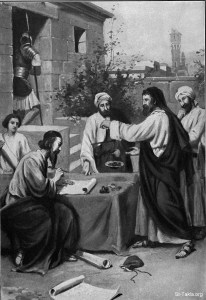 Anyway, yesterday I wasn’t at my own church — it was an Episcopal Church — but the readings are the same as ours, so I assumed the same question would have occurred to me. Unfortunately, the homilist chose the Gospel reading as his text — which was fine, except that the Gospel was a pretty straightforward cautionary tale, the one about the beggar Lazarus and the rich man who die and go to separate places, and didn’t need much explication to my mind.

What I had hoped somebody would explain to me was the first reading, the Old Testament one, which went like this:

No, wait! It wasn’t the same reading! We Catholics had an entirely different one, I find — and one that makes perfect sense to me in the context of the day’s theme (the Gospel readings were the same, and apparently the 2nd Reading, too, although I confess Paul’s letters tend to go in one ear and out the other — too much throat-clearing). You can find it here; it’s from Amos Chapter 6.

Here’s the Episcopal one, the one that confused me:

Jeremiah said, The word of the Lord came to me: Hanamel son of your uncle Shallum is going to come to you and say, “Buy my field that is at Anathoth, for the right of redemption by purchase is yours.” Then my cousin Hanamel came to me in the court of the guard, in accordance with the word of the Lord, and said to me, “Buy my field that is at Anathoth in the land of Benjamin, for the right of possession and redemption is yours; buy it for yourself.” Then I knew that this was the word of theLord.

And I bought the field at Anathoth from my cousin Hanamel, and weighed out the money to him, seventeen shekels of silver. I signed the deed, sealed it, got witnesses, and weighed the money on scales. Then I took the sealed deed of purchase, containing the terms and conditions, and the open copy; and I gave the deed of purchase to Baruch son of Neriah son of Mahseiah, in the presence of my cousin Hanamel, in the presence of the witnesses who signed the deed of purchase, and in the presence of all the Judeans who were sitting in the court of the guard. In their presence I charged Baruch, saying, Thus says the Lord of hosts, the God of Israel: Take these deeds, both this sealed deed of purchase and this open deed, and put them in an earthenware jar, in order that they may last for a long time. For thus says the Lord of hosts, the God of Israel: Houses and fields and vineyards shall again be bought in this land.

That’s from Jeremiah; the Amos reading is offered as an alternative.

Anyway, can someone explain to me why we were reading that Jeremiah passage? Why is it in the lectionary at all? What’s the moral of the story? Where’s the editorial point, to put it in my vernacular? God tells Jeremiah to do a real estate deal, and he does, and then goes into more detail about it than I’d want even if I were a real estate attorney?

Here’s my wild guess as to what the point is: I think it’s sort of, even when you’re in a time of great social upheaval (Nebuchadrezzar bearing down on Jerusalem), you should carry on with life and its dealings. If that’s true, then it’s related to one of my favorite OT passages, also from Jeremiah, on carrying on normal life even while in exile:

Thus says the LORD of hosts, the God of Israel, to all the exiles whom I exiled from Jerusalem to Babylon: 5Build houses and live in them; plant gardens and eat their fruits. 6Take wives and have sons and daughters; find wives for your sons and give your daughters to husbands, so that they may bear sons and daughters. Increase there; do not decrease. 7Seek the welfare of the city to which I have exiled you; pray for it to the LORD, for upon its welfare your own depends.b

(And yeah, I love that one in part because the last bit is way communitarian.) But if that is the point, it’s made really awkwardly and obscurely. Other thoughts?

17 thoughts on “OK, WHAT was the point of this reading yesterday?”