Robert Samuelson has joined his Washington Post Writers Group colleague Charles Krauthammer in saying that maybe a wall along our southern border isn’t such a crazy thing after all.

Of course, he does so based in facts and political realities rather than bluster and xenophobia, but that’s because he’s a rational person, and not Donald Trump. And it makes him worth listening to:

Just because Donald Trump isn’t qualified to be president — and just because much of his agenda is hateful and undesirable — doesn’t mean that everything he says is automatically wrong. Some of his ideas deserve consideration and enactment. One of these is building a wall across our southern border with Mexico…. 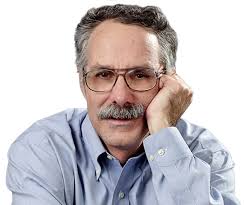 The crucial question is: If we had a wall, what would we get for it? The answer: A wall probably represents our best chance of reaching broad agreement on immigration policy, a subject that has frustrated Congress and the two most recent presidents….

Without a wall, it’s doubtful that Republicans would enter meaningful negotiations on immigration policy — and without Republican participation, the stalemate would continue. In a recent Pew Research Center poll, 63 percent of Republicans and Republican-leaning voters supported a wall and only 34 percent opposed it. The distrust is deep. Republicans think Democrats don’t truly care about stopping illegal immigration; they mainly want “amnesty” for existing undocumented immigrants. In the same Pew poll, 84 percent of Democrats and those who lean Democrat opposed a wall….

In other words, we may need to build the wall because the GOP, now fully in the grip of Trumpistas, will never agree to the rational parts of immigration reform without it. To put it another way, we don’t need a wall, but they’ll never stop thinking we do, and we need to move on and deal with some actual problems.

No, Samuelson hasn’t gone ’round the bend. He knows as well as the rest of us how absurd Trump’s approach is:

Let’s be clear on one issue: Trump’s insistence that Mexico pay for the wall is absurd . No self-respecting Mexican president would accept it. If one did, the wall would become a subject of endless bickering between the two countries as to who actually owned and controlled it. The fact that Trump made this so central to his proposal suggests that he’s simply grandstanding….

Indeed. But Samuelson, economics writer that he is, says that the ridiculous amount of money that a wall would cost could be a good deal in the long run:

If we could buy an immigration bargain for $25 billion, or even a bit more, it would be a fabulous deal. That’s the opportunity facing the next president. But we won’t make it any easier by stigmatizing the one change — a wall — that could be the foundation for compromise….

20 thoughts on “Samuelson comes out for a wall — and actually makes a decent argument, unlike you-know-who”