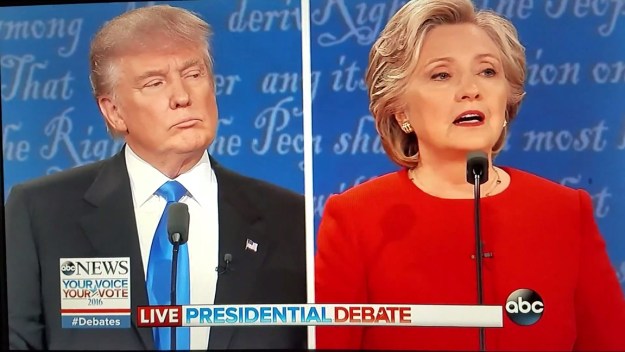 To most people who know anything about debating, or about national and international issues, or about the presidency, Hillary Clinton pretty much cleaned Donald Trump’s clock last night.

She was serious, focused, informed, composed, presidential. He was thin-skinned, blustery, illogical, inarticulate, uninformed — the usual.

But does it matter? Does it make a difference? In 2016, that is the operative question.

I’ve had several conversations with folks this morning, and everyone has more or less agreed with this assessment. But I tend to speak to well-informed people.

I keep thinking about the first Kennedy-Nixon debate in 1960. Debate experts said Nixon won. So did most people who heard it over the radio. But those who saw it on TV said Kennedy won. And that was the new factor that the professionals, the experts, didn’t take into consideration.

Today, the new factor is that a significant portion of the electorate has gone stark, raving mad.

A debate like what we saw last night would have been inconceivable in 1960. Regardless of whether you think Nixon or Kennedy won, both of them did an excellent job by any informed standard. It would have been completely impossible for someone like Donald Trump to be on that stage. (Some would say it would be impossible for someone like Hillary to be there, but such people are looking at the superficiality of gender. The fact is with regard to factors that matter, she fits comfortably into the Nixon-Kennedy set of candidates.)

But our politics are so messed up today, the electorate’s Kardashian-numbed sensibilities so accepting of the unacceptable, that the fact that she beat him like a drum last night — in the eyes of the knowledgeable, the thoughtful — may be as irrelevant as Nixon beating Kennedy on points. More so.

Trump’s support is such an illogical phenomenon that one cannot logically predict the effect of the debate.

And that’s yet another very, very disturbing thing about this election…

31 thoughts on “Sure, Hillary ‘won’ the debate, but does it matter?”