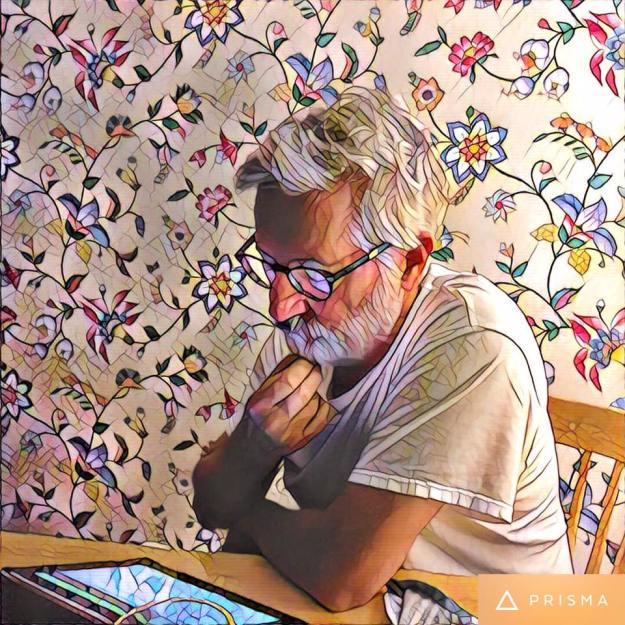 When Burl Burlingame and wife Mary were here last month, we took them with us to check out First Thursday on Main. While we were strolling about in Tapp’s, Burl shot a picture of J and me and processed it through the app Prisma before showing it to us. It was pretty cool.

So tonight, while we were playing a game of Words With Friends across the kitchen table with our iPads — a bit weird, as you wait for your opponent’s move to bounce off a satellite or something and come back down to the table where it originated so you can make your move — J took a picture of me, downloaded Prisma, and chose the “Mosaic” filter.

You see the result above. The really awesome thing about it to me is what it did with our wild kitchen wallpaper — made it look a lot cooler than real life. I’d like to have wallpaper like that.

Anyway, she posted it on Facebook, and Kathryn Fenner responded, “The Old Man and the iPad.”

He was an old man who played alone on a tablet in the Web Stream and he had gone eighty-four days now without winning a game.

A man can be destroyed but not defeated. So it is in Palabras Con Amigos.

2 thoughts on “The Old Man and the iPad”