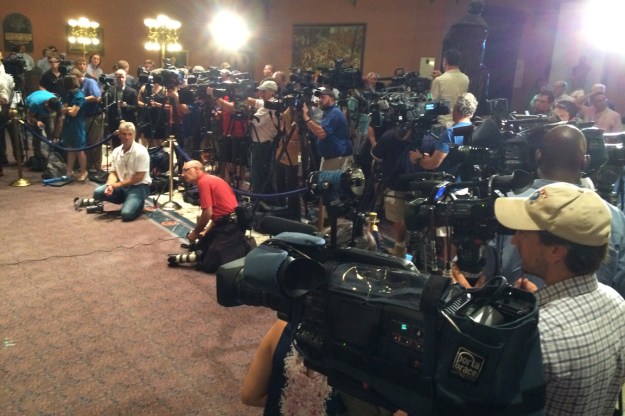 Long ago, when my friend and colleague Warren Bolton and I were both still in The State‘s newsroom, before moving to editorial — we’re talking maybe early ’90s — Warren helped lead some newsroom discussions on race.

The idea was help us all do a better, more informed job writing about subjects bearing on that issue, or set of issues, in South Carolina.

One thing I remember in particular was a meeting in which Warren and another African-American colleague urged us to avoid the habit of referring carelessly to “the black community,” as though it were some monolithic, coherent entity that thought and acted in unison, like a colonial animal.

I took that to heart because it made a lot of sense to me, and ever since I’ve hesitated to use that construction, as well as similar ones such as “LGBT community,” “Hispanic community,” and what have you. After all, we don’t write of, say, women as “the female community,” because most of us recognize women as a set of individuals containing too much diversity for such a generalization. We should follow suit with other broadly defined groups.

(Of course, it in part appealed to me because we in the white heterosexual male community are well known to prefer to deal with people as individuals rather than in terms of aggregations, something which sometimes causes members of other “communities” to counsel us to “check our privilege” and stop trying to destroy other groups’ sense of solidarity so that we may oppress them individually. Which we, both communally and individually, tend to find maddening. Smiley face.)

I am reminded of all this because of this piece in The Washington Post urging the great unwashed out there to stop referring to “the media” as though they were a single, coherent thing with one mind, acting in unison. An excerpt:

Please stop calling us “the media.”

Yes, in some sense, we are the media. But not in the blunt way you use the phrase. It’s so imprecise and generic that it has lost any meaning. It’s — how would you put this? — lazy and unfair.

As I understand your use of this term, “the media” is essentially shorthand for anything you read, saw or heard today that you disagreed with or didn’t like. At any given moment, “the media” is biased against your candidate, your issue, your very way of life.

But, you know, the media isn’t really doing that. Some article, some news report, some guy spouting off on a CNN panel or at CrankyCrackpot.com might be. But none of those things singularly are really the media.

Fact is, there really is no such thing as “the media.” It’s an invention, a tool, an all-purpose smear by people who can’t be bothered to make distinctions….

This piece, by the way, was not written by “the media,” or even by The Washington Post. It was written by this guy named Paul Farhi who is one of many individuals who works at the Post. If you want to be properly pedantic about it (and who wouldn’t want to be that?), you would only say that “The Washington Post said” something if it was said in an editorial — an editorial being an unsigned piece by the Post‘s editorial board, not something written by an op-ed columnist or someone else whose byline appears on the piece.

Yeah, I know — confusing. But to keep it simple, you’ll sound a lot smarter if you don’t refer sweepingly to “the media” as doing or saying or thinking this or that.

And we in the media community (which includes the vast army of us who no longer have actual media jobs, and a more cantankerous crowd you are unlikely to find) will appreciate it….