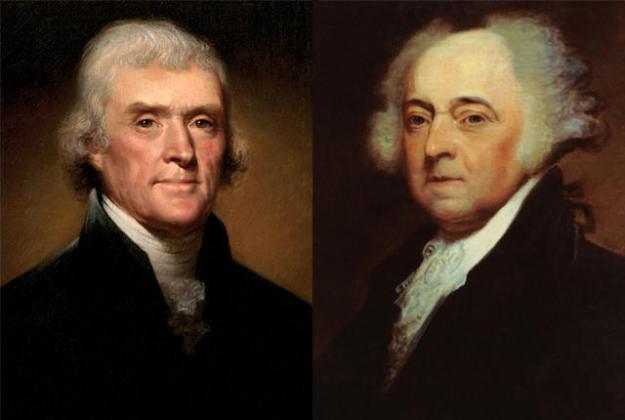 They set the precedent, and Trump could not care less…

Sorry I haven’t had time to post today, ere now… Anyway, to business…

As bizarre and grotesquely inappropriate as some of the things Donald Trump said in the second debate were (“tremendous hate in her heart”), the most important and instructive was his threat to imprison his opponent if he wins the election.

Similarly, as agog as we may be from such outbursts as “Such a nasty woman!”,  the one thing we heard in the third and final (thank the Lord) debate last night that was easily the most important, and instructive, was that Trump will not agree to abide by the results of the election. Something that was not a slip of the tongue or a momentary lapse, as he doubled down on it today.

America became America the moment that the Federalists accepted the results of the election of 1800. I don’t think Trump’s heard about that.

If there were referees in American politics, Trump would have been thrown out of the game for the offense in the second debate (actually, much sooner, but let’s stick with the debates). He completely and utterly disqualified himself.

And if the refs had been deaf and blind in that instance, they would have tossed him out for the offense last night. He showed in both instances that he has no idea at all what elections are about in this country.

The gift that America gave to the world was not merely the promise, but the fact, of the orderly and peaceful transfer of power from one person, party or faction to another. As I said above, the miracle of the election of 1800 — one that for sheer nastiness at least deserves to be mentioned in the same breath as this one — was that Jefferson took over from rival Adams, and everyone accepted it.

This miracle has been repeated every four years, with one exception: South Carolina, and a number of other Southern states, refused to accept the results of the election of 1860. Thanks to the preternatural wisdom, leadership and political skills of the man who won that election, and the blood of hundreds of thousands, the nation was saved. But that was the central crisis of our history, as Lincoln himself explained. It was the great test as to “whether that nation, or any nation so conceived and so dedicated, can long endure.”

So we got through that and made it all the way to 2016, and Donald Trump — a man who does not have a clue what this nation is all about, and does not care. Trump, the nominee of the party of Lincoln. God help us.

When he is asked whether he will accept the results of the election if he loses, he thinks it is a question about him, and what he wants, and how he feels. Because in his universe, everything is all about him.

The nation, and the things that make it exceptional and wonderful, matter not at all…