There was an interesting op-ed piece in The Washington Post this morning by Christopher Jolly Hale, director of Catholics in Alliance for the Common Good, one of those “liberal Catholic” groups mentioned in the Podesta emails.

It’s interesting for the thoughtful way he explains the tension involved in relations with liberal Democrats:

My group lives in the almost impossible position of trying to exhort fellow Catholics to respond to the social teaching of the church, which guides us to lift up the poor and oppressed, while working within a generally secular progressive movement that isn’t friendly to our views on the sanctity of life. For nearly a decade, the abortion rights community has railed against CACG’s consistent support for the dignity of the unborn child. In 2009, Catholics for Choice released a scathing 30-page report on how we were working to build an antiabortion movement within progressive politics. Then, in 2013, conservative Catholic activist Bill Donohue called us a “bogus Catholic entity” because we said Rush Limbaugh was wrong to rip Pope Francis as a practitioner of “pure Marxism.” Our group was once derided as “radical right wingers” and a “lapdog for liberals” by two different national commentators in a single month; and this past summer, I was accused of being a “feminist” on Fox News one week and a “mansplainer” in the Huffington Post the next week.

If we’re nothing but surrogates for the Democratic Party and shills for Clinton bent on collapsing the church from within, we probably should be fired, because we’re doing a pretty bad job.

In July, we fought tooth and nail to stop the Democratic Party​ from ditching the Hyde Amendment. When they refused to, we said it was growing evidence that Democrats were slowly defying their progressive ideals to become a “party of exclusion.” Catholics are right to strongly protest Clinton and the Democratic Party’s hard-line position on abortion. As we’ve said time and again, we think there’s nothing progressive about abortion. But if conservatives are going to be quick to deride Clinton’s campaign as “anti-Catholic,” they should take an honest look at Trump before doing so….

Anyway, all this stuff about liberal Catholics and conservative Catholics makes me think of Columbia native Joseph Cardinal Bernardin, who devoted much of his career to trying to get all Catholics (and people of other faiths) to get along better. 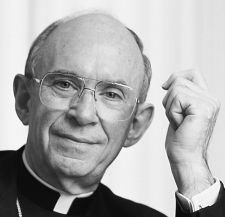 Which in turn reminds me that next week is the annual Bernardin Lecture at USC. It’s at 6 p.m. Tuesday, Oct. 25, in the auditorium on the first floor of Capstone — the same place where we hosted E.J. Dionne a few years back. Here’s a flier about the event.

The main speaker is Father Dennis H. Holtschneider, president of DePaul University. He will speak on the late cardinal’s Consistent Ethic of Life, Bernardin’s best-known contribution to theology and ethics.

Before that, at 3 p.m., there will be a panel discussion in the Gressette Room of Harper College on the Horseshoe led by my friend and fellow Bernardin Committee member Steven Millies, a poli sci associate prof at USC Aiken. Dr. Millies is the author of the recently published Joseph Bernardin: Seeking Common Ground. The topic of the discussion is Bernardin’s formative years in South Carolina. Steven will be joined on the panel by Libby Bernardin, widow of the Cardinal’s first cousin, John, and one of the family still living in South Carolina (and a fellow member of the committee); Sister Nancy Hendershott, Sisters of Charity of St. Augustine;  Anita Orf, Bernardin’s last living first cousin who grew up in the same house with him; and Fr. Sandy McDonald, longtime committee member for the annual Bernardin Lectures.

I hope you can make it.