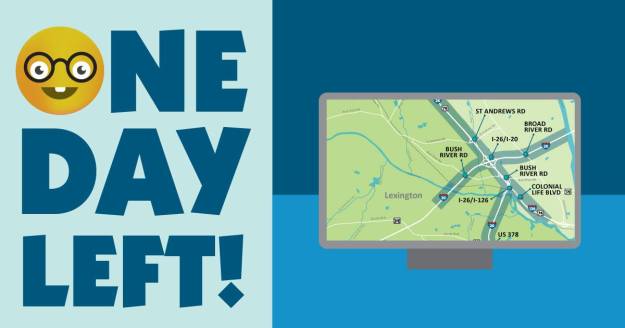 Here’s the notice that was brought to my attention — not by the government, but by my daughter — this afternoon.

Actually, that headline pretty much states the case, but I’ll elaborate a bit.

I’m a big Douglas Adams fan. But I’d always thought what he was writing was satire, outlandish situations that couldn’t possibly be true-to-life, which were grossly distorted for comic effect.

For instance, take this passage from the start of The Hitchhiker’s Guide to the Galaxy, in which our loser hero Arthur Dent has just lain in front of a bulldozer that is trying to knock his house down in order to build the bypass he has just learned about: 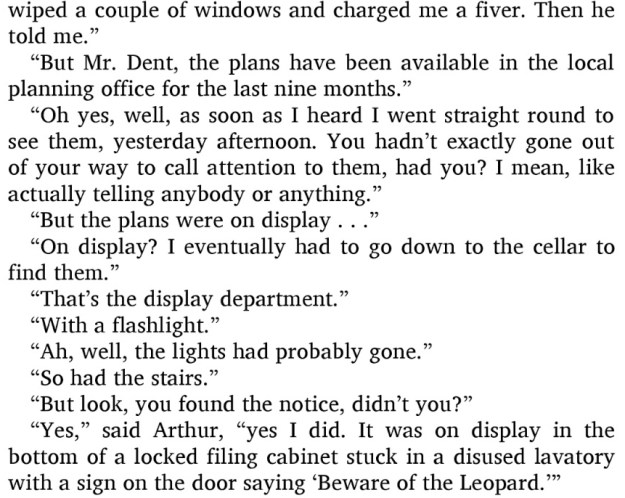 Well, today I learned that Adams wasn’t writing a comic novel. He was writing journalism. Predictive journalism, I suppose you’d call it. He was describing the very situation in which I find myself today.

Today, I forgot to bring in the lunch I had prepared, so I drove home to eat it there. Good thing, too. As I walked in, my wife was on the phone expressing amazement and alarm, and saying things like, “Nobody told ME!!!…”

She was on the phone with my daughter who lives in Shandon, who had discovered, quite incidentally, through a mutual acquaintance’s social media post, that the state of South Carolina had rather specific plans to build an Interstate more or less through our house (as I initially heard it in that moment of shock), and that today was the last day for comments.

And no, no one had told us. No one had walked down our street to knock on doors and tell us (assuming they had the courage) or left little fliers on our doorknobs (assuming they didn’t, which seems the safer bet). No one had sent us anything via snail mail. Or emailed us. Or sent us Facebook messages, or Tweets, or texts, or called on the phone, or left a comment on my blog, or used any of the bewildering array of communication methods available in the Year of Our Lord 2016.

In other words, I’d have been no worse off if the notice had been on display in the bottom of a locked filing cabinet stuck in a disused lavatory with a sign on the door saying “Beware of the Leopard.”

Nor had I seen any news coverage of the plan, which is one of three potential routes the state is considering for addressing the “problem” called Malfunction Junction.

Of course, I must confess, I had seen stories in the paper about that process, and hadn’t read any of them. You know why? Because I wasn’t interested. You know why? Because it had never struck me as a particularly compelling issue. Because why? Because I live less than a mile from the much-cursed interchange, and people have been griping about it ever since I moved back to South Carolina in 1987, and I have yet to fully understand what they are whining about.

I’ve passed through that intersection coming from every direction and going in every direction, at every time of day on every day of the week, and yeah, it gets backed up somewhat during peak drive times. You know what I call that? Living in a city. You know how to deal with it? Adjust your route, or your drive time. Or just live with it. Try this: Go live in the District of Columbia for a month and come back here, and you’ll get down and kiss the pavement at the very knottiest point of the intersection of Interstates 20 and 26. Just kidding. Don’t do that. If you do, people will start whining about you causing traffic to back up, and next thing you know, I’ve got the bulldozers at my door…

But, upon closer examination, there’s good news: Once I took a careful look at the proposed connector, I saw that it wasn’t exactly, technically, going directly through my living room. No, when I zoom in as much as the website will let me (which isn’t much), it looks like it’s going down the SCE&G right-of-way that runs directly behind the houses across the street from me. That’s a good 50 or even 100 feet from my house. All it would do is cut me off from the only ways out of my subdivision, aside from swimming across the Saluda River.

Whew. And to think I was worried.

But let’s calm down a bit. Let’s get informed. Let’s go read the news coverage we’ve been ignoring, shall we? Such as this story in The State last week, which gets specific:

If the Department of Transportation decides improving existing intersections and widening roads is the way to go, the bulk of the properties affected will be along Broad River and St. Andrews roads. Those two commercial thoroughfares parallel either side of I-26 in the heart of the busy corridor.

Widening Broad River would affect 999 sites, while another 705 would be affected on St. Andrews, according to plans outlined at an update on the massive road project at Seven Oaks School….

Ummmm… I didn’t see anything there, or elsewhere in the story, that in any way indicated that there was something to which I needed pay attention!!!!

Did you? I mean, I live on the opposite side of the river from all of that. And it sounded like they had no intention of disturbing residential areas.

Here’s the map. The crudely drawn yellow star shows you where my house is:

Apparently, there are two alternatives to ripping through my subdivision under consideration. Both are on the other side of the river from me, are cheaper, and would disturb far fewer people that the one cutting through my neighborhood.

The one called “Directional Interchange” is the one that goes through my neighborhood. The two above it seem to go mostly through some woods. Although… there is slightly greater wetland impact.

So obviously, since we live in a rational universe, I have nothing to worry about, right?

Oh, wait. I just remembered: Donald Trump is a major-party nominee for president of the United States in this universe. And there’s no guarantee he’s going to lose.

Don’t do it. Don’t do any of these. Save the money. Or, if you must address this problem, choose one of the options that cost less and cause less disruption.

That, by the way, would be my recommendation if this didn’t come anywhere within 100 miles of my house. It’s sort of my default position.

Oh, and one other thing, which may sound personal, but also fits with my beliefs about sound public policy: Next time, how about giving a guy a heads-up?

Now, could someone please hand me something that says, in large, reassuring letters, DON’T PANIC?

(Below you see the other two routes under consideration.)

20 thoughts on “DOT wants to put an Interstate in front of my house, I have not been notified, and today is the last day to comment”