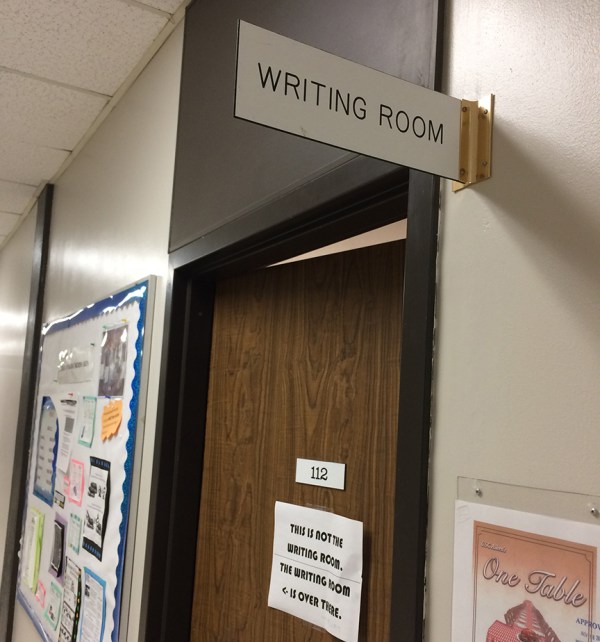 I haven’t posted today in part because I accepted Steven Millies’ invitation to go speak to his poli sci class at USC Aiken, and I just got back.

Before I tell you about the class, I want to share this door I found in the Humanities building while looking for Dr. Millies’ class. You’ll see that it leads, according to the formal signage at top, to the Writing Room.

But no! When you look a bit closer (below), things are not what they seem. I don’t know why the wording of the less-formal sign struck me as so funny, but it did. The disagreement was just so stark — This is the Writing Room… NO! This is emphatically NOT the Writing Room. The Writing Room is over THERE, dummy!… The first sentence alone would have been funny. But the second sentence, with the little arrow, is what made it wonderful. I almost picture Marty Feldman pointing and saying, “There wolf! There Writing Room!…”

Anyway, I offered to speak to Steven’s class during a conversation after the Bernardin Lecture the other night (he and I serve on the lectureship’s committee), when he told me his American Government class was talking about media this week. He took me up on it.

And I had a blast, especially since I didn’t have to prepare a lecture. I just showed up and answered questions. Sometimes, with undergraduates or younger students, it’s hard to get questions, or at least hard to get relevant ones. This class did great. I hope I did all right for them.

But I seriously, seriously doubt they enjoyed it as much as I did. It’s hard to explain, but standing in front of a room taking and answering questions gets me really jacked up. I don’t know what it is. I’m not crazy about giving a speech, because it’s so… one-way. I stand up there giving a prepared talk, and I look at all those people staring at me, and I wonder, Is this interesting them at all? Is this what they were looking for when they invited me?

And I’m never sure, unless they laugh at a joke or something. So when I’m asked to speak, I always ask whether it’s OK to keep the talk short and move on as soon as possible to Q&A. Then I come alive — and sometimes even the audience seems to enjoy it.

After the class, I ran out to my car, all wired up, to make an important phone call I had scheduled for that time, and I really hope I didn’t… overflow too much on the person I was calling. I may have. I looked when we were done, and the call had lasted 41 minutes. Later, driving back to Columbia, I returned a call from earlier from a reporter at The New York Times wanting to talk about something having to do with SC politics, and I may have overdone that a bit, too. To my great surprise, shortly after that call, I was already back in West Columbia…

So basically, I guess, I’ve been blogging all over people today… just not in writing.

Anyway, I’ll give y’all an Open Thread in the next hour or so. I hope y’all appreciate it more than y’all usually do on a Friday afternoon, harrumph… 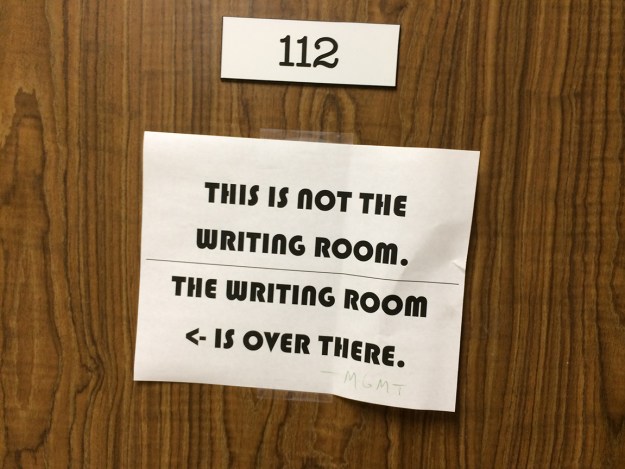