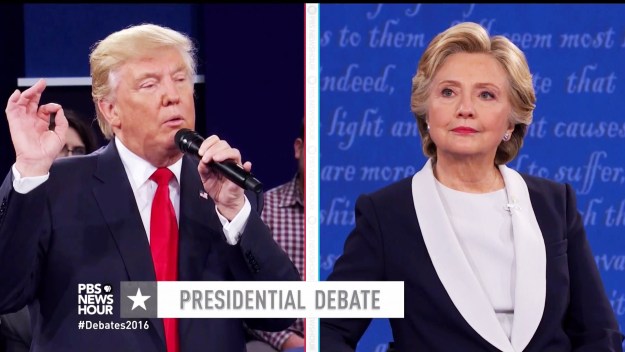 What needed to happen in the debate last night was this: Hillary needed to beat Trump — or rather, he needed to beat himself — as soundly as in the first debate. That, combined with the recording of Trump being Trump in 2005, would have meant the end of this drawn-out farce. Continuing the weekend trend, virtually every Republican who has gone along with his campaign would desert him, and we could all talk about something else for the next four weeks, secure in the knowledge that he would be so crushed on Nov. 8 that nothing like this will ever be repeated.

That didn’t happen. Not that Trump debated well, or in any way acted like the standard-bearer of a major party. But the bar for him is the lowest in living memory, perhaps in U.S. history, and in the expectations game, he held his own, since he was no worse than he is on an average day.

There were many low points in this debate, but what was the lowest? It was this:

Wow! Wow! He just promised, if elected, to use the Attorney General to carry out a political vendetta on his opponent! “You’d be in jail…”

Only that had been lacking to complete the portrait of Trump as the jefe of a banana republic: The use of the power of the state to persecute and imprison political opponents. All hail the caudillo!

This was no doubt lost on people who support Trump, and those who might consider voting for him. But this was a low point in American democracy, another bold step toward fascism. By contrast, his statement that his opponent has “hate in her heart” — also something we’ve never seen before — was less remarkable. And all the talk about adolescent sexuality was just background noise.

His supporters will protest: But Hillary said he had run a “hateful, divisive campaign!” Yes, she did, and that would indeed be a terrible thing to say if it weren’t true. Even being true, it’s not helpful, only a step or two above deplorable. But the difference between running an awful campaign and having hate in your heart is considerable.

What was Hillary Clinton’s lowest point? Well, I was most bothered by this:

See what she did there? She normalized Trump. She mainstreamed him. She did the thing that I, and many others, have begged people not to do: pretend this is just another election like any other, a contest between (in Republican eyes) wild-eyed, left-wing statists and (in Democratic eyes) fat cats who look like the little top-hatted man in Monopoly. She watered down one of the most disturbing things about Trump — that he’s always out for himself, not the country, or a party, or a class, or a faction. Just himself.

Yeah, I know why she does it: To please the “feel the Bern” crowd in her own party. But this is NOT a contest between classes, or of ideas. This is an election to decide whether an out-of-control, deeply narcissistic, crude, avaricious, vindictive, unbalanced man with fascist tendencies and no concept of what a liberal democracy is about will hold the most powerful position in the world.

That is all this election is about. It could have been about other things, had the Republicans seen their way clear to nominating a normal person. But it isn’t, because they didn’t.

(Perhaps this is a good moment to pause to speak to those just joining us, who have not followed my blog over the past 11 years, or my long career before that: I’m not one of the “liberal media” one hears so much about. I’m a guy known for only endorsing Republicans for president during all those years leading The State‘s editorial board — although we were about 50/50 between Democrats and Republicans on the state level. I’m a guy who is stunned that the GOP didn’t nominate someone normal, such as John Kasich — someone who is as disgusted by Trump as I am, someone I would gladly vote for instead of Hillary Clinton. I just thought I’d mention all that, in case you don’t know me and you think, like Hillary Clinton, that this is about Democrats vs. Republicans.)

Maybe in four years we can have a normal election, talking about the usual tiresome stuff, with 40 percent of the population voting one way without thinking and 40 percent doing the same in the other direction, and the 20 percent of us who don’t subscribe to either brand of nonsense will step in and made the decision.

From the perspective of this election, that almost sounds lovely. But we don’t have that luxury this year…