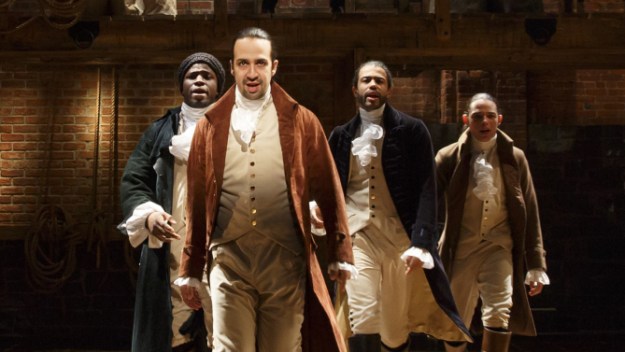 I like putting “Aaron Burr” in headlines. It lets me pretend that I’m living in times in which “the damn’ fool that shot him” was alive and active in our politics. Not that I like Burr much. But it puts me in a time when our presidential choices were between people like Washington, Adams, Jefferson and Madison (and Burr, who nearly won over Jefferson, but let’s skim over that).

Anyway, to follow up on yesterday’s post about the “Hamilton” incident (again, something that sounds like the kind of incident I’d rather be writing about than “Trump” incidents), there’s a growing body of thought out there that the artsy liberal actors played right into the hands of the president-elect. Even that Pence’s presence there may have been a deliberate provocation.

And that this sort of thing is likely to happen again and again because, you know, those Eastern cultural elites are just so predictable, and can’t help themselves. Strike them on their emotional patellar tendons, and they jerk.

Trump, and only Trump, won this round in the culture wars. And with many more rounds to come, liberals need to find some way not to take his bait.

But I also wouldn’t be surprised if Pence attended Friday’s performance specifically hoping, or at least expecting, to stoke boos and a brouhaha that would ultimately rouse the Republican base — and distract from much more embarrassing Trump-related news.

Think about it. Trump could not have chosen a more perfect cultural foil than “Hamilton” if he’d designed the show himself. The show has — somewhat paradoxically — become an unwitting symbol of out-of-touch, cosmopolitan liberal elites.

Tickets to the smash hit can fetch thousands of dollars, making them inaccessible to all but the reasonably wealthy. The show is fawned upon by effete elites such as myself….

Most important, at least to Trump’s base, “Hamilton” has Hispanics literally taking the jobs of old white men…

A digression: Actually, I think by casting “people of color” (one of the odder, most stilted, most retrograde-sounding phrases currently approved by those Trump is pleased to bait) in the roles of the Founders, Lin-Manuel Miranda has struck a blow against political correctness. By portraying the folks too many would dismiss as “old, dead white guys” as people of every race and color, he has rescued them from the scorn of the sillier Identity Politicians and shown the universality of their ideas and accomplishments. It sort of says, Shut up about their race and gender and read what they wrote!

But back to Ms. Rampell’s point, which has also been made by duty conservative Marc Thiessen:

Hey Democrats, want help to rally the country around Donald Trump? Here’s a great idea: Have a crowd of wealthy, out-of-touch Manhattan liberals (who can afford $849 tickets to “Hamilton”) boo Vice President-elect Mike Pence while the cast of the Broadway show lectures him on diversity.

The Democratic Party’s alienation from the rest of America was on full display at the Richard Rodgers Theatre on Friday night. And the left seems completely oblivious to how ridiculous it looks to the rest of the United States. Professors at Yale and Columbia universities and other elite schools postpone exams and cancel classes for students who could not deal with the election results. Kids in Washington schools cut class with tacit approval from administrators to march in protest of the results of a free and fair election. School officials in Montgomery County offer grief counselors to “help students process any concerns or feelings they have about the election.” (Funny, I don’t recall anyone canceling exams or offering my kids grief counselors when Barack Obama was elected).

People in the American heartland see all this, and they shake their heads in disgust. Today’s Democrats have become a party of coastal elites completely disconnected from the rest of America. Doubt it? Take a look at a county-by-county map of the 2016 presidential election. You can drive some 3,000 miles across the entire continental United States — from sea to shining sea — without driving through a single county that voted for Hillary Clinton….

They may be looking at it from opposite ends of the political spectrum, but it’s interesting that they both reached similar conclusions…