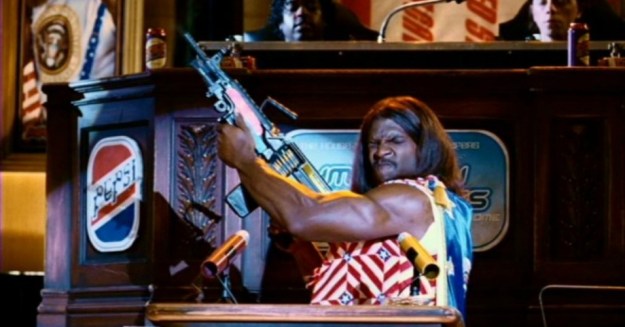 In reaction to a previous post, Bryan Caskey wrote:

What a stupid time to be alive.

Yep. None stupider, in U.S. history.

I’m just so embarrassed for my country. And every day for the next few years, I’ll wake up and have to be embarrassed again. And who knows how long it will last? Our political system is now in such disarray — neither the Democrats nor the Republicans have any idea how to get back to electing rational people, and there are no other entities on the horizon prepared to do so — that I can’t see the end of this epidemic of stupidity.

I’ve always despised H.L. Mencken for his contempt toward most of America, but now it seems we’re every bit as stupid as he thought we were.

The people who made “Idiocracy” lacked imagination. It’s arrived 500 years earlier than they supposed. In that fictional world, President Dwayne Elizondo Mountain Dew Herbert Camacho is a former professional wrestler. (As you see above, he shared a certain penchant with Ted “Machine-Gun Bacon” Cruz.) In our real world — and every day, I struggle to persuade myself that this actually is the real world — our president-elect is an inductee of the World Wrestling Entertainment Hall of Fame.

This, of course, is not an original thought. Quite a few people have said it in recent weeks. (My only defense is that I did THINK it Election Night, but didn’t feel like getting into it.)  Joel Stein explored it in TIME magazine as early as May in this piece. Excerpts:

Eight years ago, with the publication of Susan Jacoby’s The Age of American Unreason, our country had a debate about whether its citizens were becoming less intelligent. This year, we had a debate about how big Donald Trump’s penis is. While we have not resolved the latter, we have answered the former. Former means first, and latter means second….

In the Idiocracy-est moment of the whole 2016 campaign, a Trump supporter who shoved a black protester in the face explained his candidate-selection process to a reporter on MSNBC, Ali Vitali, thusly: “He’s no-bullsh-t. All balls. F-ck you, all balls. That’s what I’m about.” Though George Washington never said those exact words, he would have certainly killed a man for saying them.

I called the people who made Idiocracy to see how they so accurately predicted the future. “I’m no prophet,” Judge told me. “I was off by 490 years.” He too is shocked at how eerily similar the world has become to the one his movie depicted. He and Idiocracy co-writer Etan Cohen have been working on fake campaign ads for Camacho to be used as anti-Trump web videos, but they’re having a hard time. “Our jokes would be like, ‘I’m going to build a wall around the earth.’ They were only incrementally stupider,” says Cohen. “Writing Idiocracy was just following your id. Now unfortunately our id has become our candidate for President.” The danger here is clear: we will no longer be able to have comedies with hilarious dumb characters….

And why is that? Because all of a sudden, it’s not funny.

Come to think of it, “Idiocracy” wasn’t all that funny to start with. The opening credits, explaining how intelligent people in the present day failed to reproduce, while idiots did so like rabbits — basically, the explanation of the premise — was the best part. The rest quickly grew old. Because it’s just not much fun to contemplate living in a world governed by stupidity.

And now, here we are…