I’m not saying there’s a connection to Trump getting elected last week. I don’t think this is actually happening because the coolest people refuse to stay on such a planet. But it would be nice to have a little break from horrible news.

First, there was Leonard Cohen — whom I recognize as one of “the coolest people” even though I was never much of a fan. I loved “Hallelujah” (as practically everyone on the planet does), and I recognized one or two other songs, such as “Chelsea Hotel #2,” but that was about it. (I knew he was someone people who were way cooler than I listened to way back in the ’70s, but never got around to him until a few years back.) 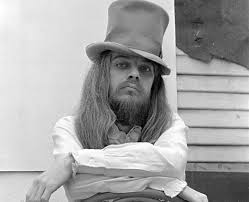 But yesterday the real blow came — the death of Leon Russell, The Master of Space and Time himself! The man who defined cool! The calm, imperturbable center of his very own “hippie commune, bonafide,” the Shelter People. The mysterious master who drew so many other famous musicians (George Harrison, Bob Dylan, Joe Cocker, Rita Coolidge, Elton John) to him, but was always apart — presiding imperiously at the keyboard with his bone-straight graying hair (who that we knew had gray hair in 1971?) falling around his shoulders, the regal beard, the top hat, the mirror shades.

Even though he had been a fixture on “Shindig!” years before (a previous incarnation, with a dark Elvis pompadour, no facial hair — but still the same Tulsa voice, the same piano magic), I never knew who he was before the “Shelter People” album in the summer of 1971. But then it seemed he was everywhere — doing the rockingest set of all at the Concert for Bangladesh!… having his own very trippy TV special with the Shelter People just hanging out in a studio — and had always been everywhere, though I hadn’t known it. (Listen to Elton John reel off a litany of people Leon had played with over the years — Bing Crosby, Johnny Mathis, Doris Day, Dean Martin, Herb Alpert, Frank Sinatra, before he even got to Delaney and Bonnie and all the others of my generation — on this clip.)

A year or two later, I saw him in what may be the best rock concert I ever saw in my life, or ever will see. I may have described it before, but let me just tell you how he made his entrance: It was in the Mid-South Coliseum in Memphis. The whole entourage was out there on the stage before him — maybe 20 people, from the usual long-haired guys with guitars to the women who sang backup standing on elevated platforms. At the center of the stage were two grand pianos, and sitting at one was this black dude (probably someone famous, but I don’t know who) banging away in this raucous gospel-rock style, and everybody else jamming along with him. But no Leon. They went on like this for maybe 10 minutes, and as it climbed toward a climactic crescendo, Leon made his appearance. He was in a snow-white suit with white top hat (or was it a cowboy hat? — either worked for him), and he was playing a matching white Stratocaster, and I’m like I didn’t even know he played guitar, but I realized that of course, Leon could play anything he wanted. 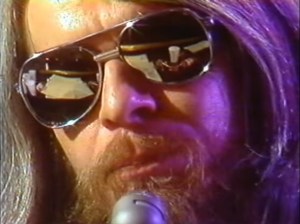 He strolled out, so casually, so in command of the stage. Then he stepped up onto the second piano’s bench, still playing, then on up to the top of the piano, and stood there and kept playing for a moment, with everybody else rocking away like mad. Then he stepped down, ditched the guitar, sat at the piano, starting dueling with the other pianist, and that’s when the music really hit its peak.

I’ve never seen anyone else with that kind of presence on stage. I was as impressed as Huck Finn at the circus. Worth every penny of the probably $5 the ticket cost me, and then some. Later, I saw Elvis on the same stage, and I don’t think even The King topped Leon, although perhaps I should shy away from committing lèse-majesté — after all this was in E’s own hometown.

I thought I’d share my very favorite Leon song, “Stranger in a Strange Land,” above. I chose that clip because it’s a live performance (a less polished one than I saw in Memphis, but you can feel the energy), so you can get a sense of his style, but I actually prefer the studio version, which you can hear here. I first heard this song when, at the suggestion of my uncle, I got the “Shelter People” album in mid-1971. It was within a year after I first read Heinlein’s novel — which has nothing to do with the lyrics of the song, but is all part of the sensibility of the time.

And to reinforce that Leon had always been with us, even when we didn’t realize it, I also include this clip from his “Shindig!” days…

7 thoughts on “Leon Russell!?! Why are all the coolest people dying off?”