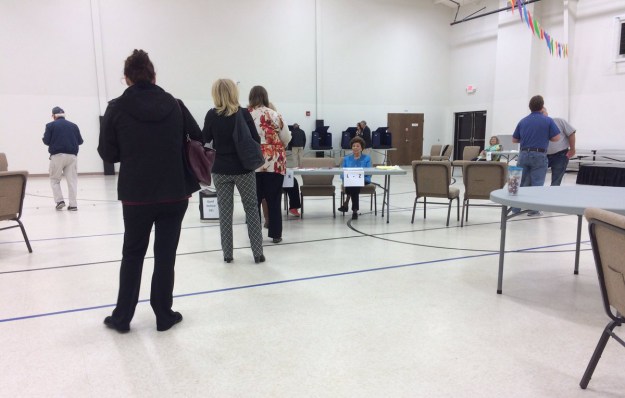 Sorry not to have posted earlier. Technical problems on the blog. Here’s hoping they’re fixed now. I’m sure it was just a probing cyberattack by the Russians.

Well, I went and I voted, and it went fine, although there was a tiny glitch, no doubt also the work of the Russians. (Yes, those of you new to the blog; I’m kidding. I think…)

My wife got up just before 7, and was out the door before I could get ready. She returned in maybe 40 minutes, reporting that the lines at the Quail Hollow polling place weren’t bad, but the traffic getting in and out was horrible. Here’s the problem: We vote at Saluda River Baptist Church, which is at 3459 Sunset Blvd — across Sunset from our neighborhood. It’s in a section of Sunset where the hordes of people heading into town can actually get up a bit of speed — like, 55 or 60 mph — and this was rush hour. The driveway into the church is just below the crest of a hill. So basically, you can’t see the oncoming traffic until it’s on top of you.

So, I waited a bit, for rush hour to pass, then went to vote. And there was no line, for those of us with names in the L-Z range. The A-K people did have a short line to wait in, which is right and proper. It’s good to be the W.

Not only that, but I remembered my photo ID this time!

But then, when my neighbor who was working the poll took my little pink card and slipped that cassette thing into my machine to activate it… nothing happened. She was about to move on to try another machine when she noticed that the one next to this one still had a screen with candidates on it showing, and the voter had left. And here’s where we get into the whole voting-as-a-community thing.

That was Mr. So-and-So, she said, and he just lost one of his best friends last week, and has a lot on his mind. She ran after him, turning me over to another poll worker. The man returned, apologizing to all, and finished voting.

When I was done — this machine worked fine — she said she had told the man no problem, and that she supposed he was thinking about his friend who had died, and he said yes, he had been.

I learned one other thing — a bit earlier, the line had been out the door. So my timing was perfect.

How did it go for y’all? What are you seeing out there?

40 thoughts on “Please share your reports from the polls”