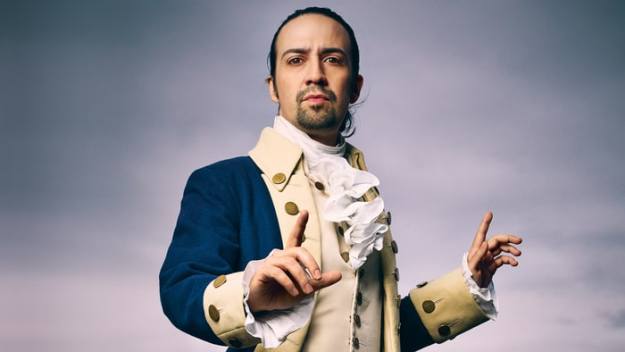 Never mind all the paintings you’ve seen; most photographs of “Hamilton” found via Google look like this.

In a comment earlier today, I sought to excuse myself from any errors in memory by confessing that I hadn’t read all of the Federalist Papers in decades.

Realizing that was lame, I decided that I should at least go back and read the one that addressed the subject at hand, the Electoral College. That’s Federalist No. 68, probably by Hamilton.

I must say, there was little mentioned about the importance of having the president chosen by states rather than masses of people, beyond oblique references such as these:

And as the electors, chosen in each State, are to assemble and vote in the State in which they are chosen, this detached and divided situation will expose them much less to heats and ferments, which might be communicated from them to the people, than if they were all to be convened at one time, in one place….

Talents for low intrigue, and the little arts of popularity, may alone suffice to elevate a man to the first honors in a single State; but it will require other talents, and a different kind of merit, to establish him in the esteem and confidence of the whole Union, or of so considerable a portion of it as would be necessary to make him a successful candidate for the distinguished office of President of the United States….

But such commentary is hardly necessary since the Constitution itself makes it perfectly clear that the president is to be chosen by electors who are themselves chosen by states:

Each State shall appoint, in such Manner as the Legislature thereof may direct, a Number of Electors, equal to the whole Number of Senators and Representatives to which the State may be entitled in the Congress: but no Senator or Representative, or Person holding an Office of Trust or Profit under the United States, shall be appointed an Elector.

Of course, there is a good deal to suggest that Hamilton thought it proper that the method of selection defer to “the sense of the people,” not least the fact that the House would be the body to decide if a clear winner did not emerge from the electors’ deliberation.

Note that the idea that there should be deliberation, and not an up-or-down vote of the people, was crystal-clear:

It was equally desirable, that the immediate election should be made by men most capable of analyzing the qualities adapted to the station, and acting under circumstances favorable to deliberation, and to a judicious combination of all the reasons and inducements which were proper to govern their choice. A small number of persons, selected by their fellow-citizens from the general mass, will be most likely to possess the information and discernment requisite to such complicated investigations….

Also, remember yesterday when I suggested that “It would be nice for it to be an actual COLLEGE, in which people study year after year our nation’s history and political science, so that they are completely infused with the kind of knowledge that Donald Trump utterly lacks?”

Hamilton would have hated that idea, apparently. He thought the temporary nature of the college — assembled ad hoc, for the immediate task of electing a president once — was one of the system’s great virtues. Of the Framers, he wrote:

They have not made the appointment of the President to depend on any preexisting bodies of men, who might be tampered with beforehand to prostitute their votes; but they have referred it in the first instance to an immediate act of the people of America, to be exerted in the choice of persons for the temporary and sole purpose of making the appointment. And they have excluded from eligibility to this trust, all those who from situation might be suspected of too great devotion to the President in office. No senator, representative, or other person holding a place of trust or profit under the United States, can be of the numbers of the electors. Thus without corrupting the body of the people, the immediate agents in the election will at least enter upon the task free from any sinister bias. Their transient existence, and their detached situation, already taken notice of, afford a satisfactory prospect of their continuing so, to the conclusion of it….

The context of that, by the way, was in part to guard against this danger:

Nothing was more to be desired than that every practicable obstacle should be opposed to cabal, intrigue, and corruption. These most deadly adversaries of republican government might naturally have been expected to make their approaches from more than one quarter, but chiefly from the desire in foreign powers to gain an improper ascendant in our councils. How could they better gratify this, than by raising a creature of their own to the chief magistracy of the Union? But the convention have guarded against all danger of this sort, with the most provident and judicious attention….

Vladimir Putin might get a good chuckle out of that. But on the other hand, every foreign government except those of Russia and China preferred Hillary Clinton. Still, can the mechanism be said to work when the desires of our allies are thwarted, and the preferences of our adversaries granted?

If you haven’t wept for your country yet after last week, consider this hope of Hamilton’s:

The process of election affords a moral certainty, that the office of President will never fall to the lot of any man who is not in an eminent degree endowed with the requisite qualifications…. It will not be too strong to say, that there will be a constant probability of seeing the station filled by characters pre-eminent for ability and virtue. … we may safely pronounce, that the true test of a good government is its aptitude and tendency to produce a good administration….

The final irony is that, while today the College is perhaps the most reviled part of the Constitution, at the time Hamilton saw it as hardly needing defending, since it was one of the few parts not being heavily criticized:

THE mode of appointment of the Chief Magistrate of the United States is almost the only part of the system, of any consequence, which has escaped without severe censure, or which has received the slightest mark of approbation from its opponents. The most plausible of these, who has appeared in print, has even deigned to admit that the election of the President is pretty well guarded. [1] I venture somewhat further, and hesitate not to affirm, that if the manner of it be not perfect, it is at least excellent. It unites in an eminent degree all the advantages, the union of which was to be wished for….

What a difference a couple of centuries make…

17 thoughts on “Refreshing my memory about the Electoral College”