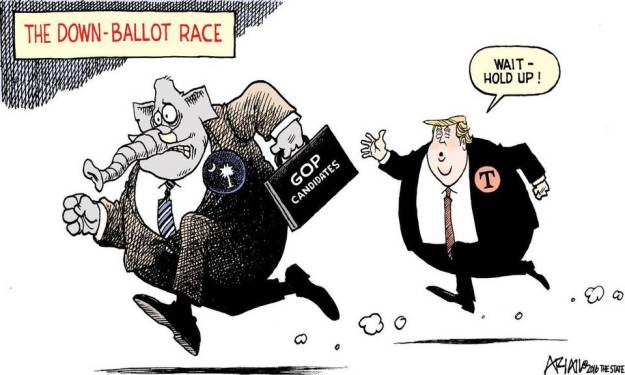 A lot of them may have RUN from him, but too few stood up to be counted.

Some of you have expressed the opinion that I’ve just gone overboard in describing the unique threat to our country that is Donald Trump.

I entirely disagree. The one thing that, for me, would make a Trump victory even worse would be if I were kicking myself tomorrow, thinking, If only I’d tried harder, maybe I could have persuaded one or two people…

What’s that sports expression? I don’t want this to end with me thinking I’d left anything on the field. Or that, wait… that I hadn’t left it all on the field. Whatever. Something like that.

Besides, there are so many things to be said about the worst man ever to capture a major-party endorsement for POTUS. And the fact that anyone would consider voting for him a good idea is so stunning that at the very least, I must give vent to my amazement. (Today, I read yet another piece purporting to explain why people would support him, and sorry — it doesn’t get the job done. It still doesn’t add up.)

But let’s say, as Jerry Brown used to say, that less is more. Let’s say a minimalist approach would have persuaded more of my interlocutors — or, at least some.

I think I got a glimpse of how to do that last week, while reading a Washington Post editorial headlined, “History will remember which Republicans failed the Trump test.” (Which it will.)

Since the many things that are wrong with Trump were not the subject of the piece, his disqualifying qualities were dealt with merely in passing, very quickly. An excerpt from the piece:

WHEN THE republic was in danger, where did you stand? History will ask that question of Republican leaders who knew that Donald Trump was unfit to be commander in chief.

Some said so, despite possible political risks. Sen. Ben Sasse (Neb.), Sen. Jeff Flake (Ariz.), Sen. Lindsey O. Graham (S.C.), former Massachusetts governor Mitt Romney and former high-ranking officials such as Brent Scowcroft, Colin L. Powell, Henry M. Paulson Jr., Michael V. Hayden and Robert M. Gates did their best to help Americans understand the risk of electing an ignorant, thin-skinned man with no relevant experience. Scores of respected former ambassadors and assistant secretaries also spoke out. Meanwhile, other senior statesmen were quiet; George P. Shultz and Henry A. Kissinger, for example, said only that they would endorse neither candidate. Their voices could have made — could still make — a difference. So could the voices of former presidents: Though there have been hints that former presidents George H.W. Bush and George W. Bush support Hillary Clinton, they have not taken the public stand their nation needs….

Did you notice it? The Post‘s editorial board dealt adequately with Trump using only two, relatively mild, modifiers: “ignorant,” and “thin-skinned.” (They also said he had “no relevant experience,” but that was hardly necessary. That’s just one reason why he is so ignorant.)

Only one thing is missing, really, to completely persuade any reasonable, informed person that there is NO WAY this man could be considered for this job, even for a second: The fact that he is not merely ignorant; he is unwilling to learn. (He’s not like these guys.) Which, of course, is the worst, most damning, and permanent sort of ignorance. This man actually thinks he knows everything he needs to know. He’s utterly convinced of it.

That, in and of itself, completely disqualifies him. Maybe, under desperate circumstances, we could deal with a guy who could learn on the job, but not someone who refuses to.

The “thin-skinned part” takes him from merely grossly unqualified to being dangerous. This is a man who stops everything when he believes he has been disrespected — which is, of course, a lot of the time (and, in his defense, he’s not always imagining it). There is no issue so important that it cannot be dropped while he goes on the attack against the offender. Getting even is, for him at such times, the number-one priority in his universe.

You just don’t hand the awesome, historically unprecedented power of this job — which includes (and while it gets tiresome with repetition, one feels obliged to mention this until people actually listen) the ability to destroy most life on the planet in a matter of minutes — to someone who considers his own personal grudges so pathetically important. Even if he doesn’t decide to nuke somebody because they made a comment about his hands (I actually think the chances of his doing so are slim, although not quite “none”), the fact is that for a time, he wouldn’t be able to think about anything else. We’ve seen it. And that’s bad enough.

Yes, there are many, many other things that can be said against this man — the racism, the xenophobia, the lifelong habit of treating women like dirt. Other stuff.

But to a reasonable, thoughtful person who takes voting seriously, “ignorant” and “thin-skinned” should be more than enough…