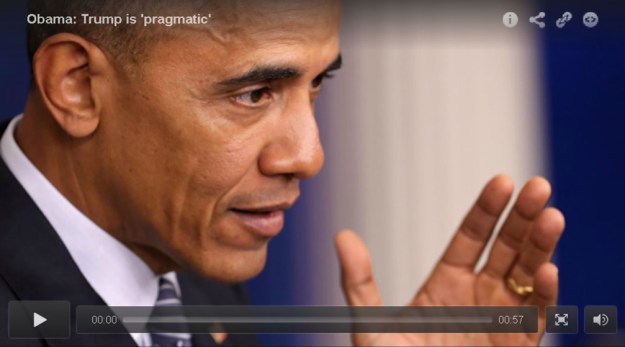 Bryan sent me an email headlined “Obama: Trump is ‘pragmatic’ – POLITICO,” followed in the body of the message by:

Don’t give me that look. I didn’t say it, Obama did.

Hey, I wasn’t giving him any look.

What the president said was completely correct, both in the sense of being the proper tone for a president to strike in speaking of his successor, and in terms of accuracy.

Trump is not an ideologue, and is indeed “pragmatic in that way.”

If I were in Obama’s predicament, in a situation in which I felt constrained to say something positive (or at least nonjudgmental) about the president-elect — and he is in that situation — I would say that very thing.

And it would come out sounding nice, because everyone would know how I look down on ideologies. Of course, there’s something that is often worse than an ideologue, which is someone who doesn’t deal in ideas at all. But it would sound nice, and it would be accurate, as far as it went.

Trump believes not in ideas, but in the moods that strike him. That makes him extraordinarily dangerous, but it also means he’s not a rigid ideologue like Ted Cruz. So there’s that. And in doing his duty to say calming, diplomatic things, POTUS hit on just the right thing to say.

He’s good at that. I’m really gonna miss this guy. Watch the video and see how thoughtfully and maturely he addresses the question, and you will likely agree. The nation is really, really going to miss that quality…

4 thoughts on “This is the right way to praise Trump, if one must”