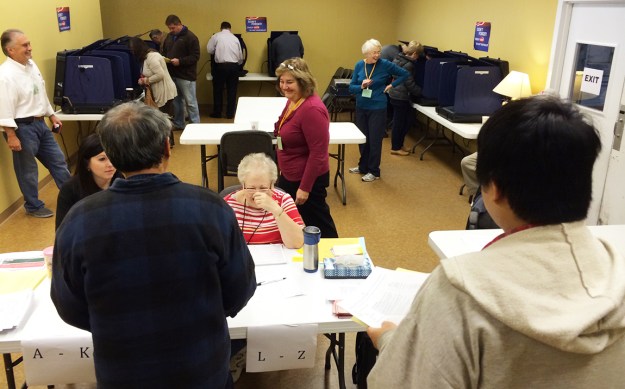 I liked this Tweet from Nu Wexler this morning:

I didn’t vote early because I love the election day experience. Waiting in line, seeing who has signs out, and getting the #iVoted sticker.

Amen to that, Nu!

I’ve written about this a few time before, but to me, standing in line with my neighbors — some of whom I might not see years on end otherwise — is a core experience of citizenship, a moment when the communitarian element of life in our republic is most palpable. It makes me feels kind of like a character in a Frank Capra movie.

Not to condemn folks who vote early, because so many of them have good reasons. But those who do so simply in order to avoid the Election Day experience are in many cases — I suspect; I have no data to support this — somewhat more likely to think of themselves as consumers rather than citizens. I’ve had some things to say about that as well.

As I wrote awhile back:

I think this country is full of people — left, right, and middle — who don’t take voting seriously enough. This is why I oppose early voting, and virtual voting, and just about anything other than heading down to the polls and standing in line with all your neighbors on Election Day, being a part of something you are all doing together as citizens. I believe you should have to take some trouble to do it. Not unreasonable amounts of trouble, just some…

So I was happy to reTweet Nu this morning with an enthusiastic “Yes!” And was gratified when my friend Mary Pat Baldauf Tweeted this, apparently in response:

As I replied, what we should be properly called is “voters,” period. Voters who take the process seriously, and cherish and savor it. 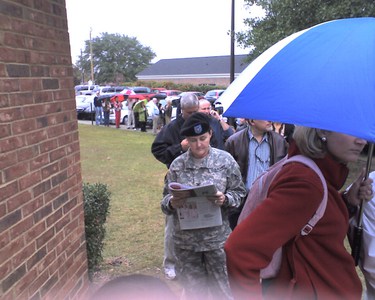 Oh — one other, somewhat related, point: Robert Samuelson had a column recently urging us all to “Split your ticket.” I still marvel that voting for candidates of more than one party is sufficiently rare (shockingly rare, in fact) as to be remarked upon, and have a special name.

You know what I call ticket-splitting? “Voting.” True voting, serious voting, responsible voting, nonfrivolous voting. I am deeply shocked by the very idea of surrendering to a party your sacred duty to pay attention, to think, to discern, to discriminate, to exercise your judgment in the consideration of each and every candidate on the ballot, and make separate decisions.

If you don’t go through that careful discernment, you aren’t a voter, you are an automaton — a tool of the false dichotomy presented by the parties, a willing participant in mindless tribalism.

Sure, you might carefully discern in each case and end up voting only for members of one party or the others. And that’s fine — kind of weird, given the unevenness of quality in both parties’ slates of candidates — but if that’s where you end up.

But pressing the straight-ticket button, without going through the ballot and making individual decisions in each race — that’s unconscionable, and an abdication of your responsibility as a citizen…

33 thoughts on “We are what are called ‘voters,’ period.”