In a comment earlier I wrote about how concerned I am about the course of my country — and of the world. More so than I’ve ever been in my more than six decades on this planet.

It’s not just Trump — he’s just a glaring, ugly sign of it. Take a step back, and reflect: Who came in second in the GOP primaries? The only guy who gave Trump any kind of a run for his money as the worst candidate ever — Ted Cruz. All the better-suited candidates were stuck in single digits. And the Democrats have nothing to brag about — they put forward the second-most (second to Trump) despised candidate in the history of such things being measured. And she had trouble putting away a cranky old socialist to get that far.

How can I blame Trump when the real problem is that millions of people voted for him? I actually almost feel sorry for this bizarre figure, because he truly had zero reason to expect that he’d actually end up in this position.

I mean seriously: If you don’t even go deeper than his hair, you can tell at a glance that the country’s really, really in trouble. This is what will lead us? 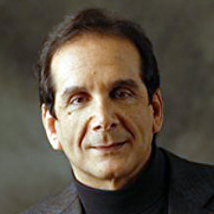 And the rest of the world, too. As Charles Krauthammer wrote today, “After a mere 25 years, the triumph of the West is over.” The promise of 1991, with the Soviet Union finally collapsing and the U.S. leading a broad coalition against Saddam in Kuwait — the New World Order in which Civilization, led by the City on a Hill, would enforce its values against aggressors — is behind us.

The United States is pulling back, and the bad guys just can’t wait to flow into the vacuum. In fact, they haven’t been waiting — in Syria, Iraq, Ukraine or the South China Sea. Or even in our own backyard.

He sums it up this way, blaming BOTH Obama and Trump:

Donald Trump wants to continue the pullback, though for entirely different reasons. Obama ordered retreat because he’s always felt the U.S. was not good enough for the world, too flawed to have earned the moral right to be the world hegemon. Trump would follow suit, disdaining allies and avoiding conflict, because the world is not good enough for us — undeserving, ungrateful, parasitic foreigners living safely under our protection and off our sacrifices. Time to look after our own American interests.

I think he’s trying a little too hard at false equivalence there, but at the same time, while Obama’s a smart guy who knows how to say the right things (unlike, you know, the other guy), there has been a noticeable tinge of “Oh, this country isn’t all that special” in his stance toward the world. A tinge that some of you agree with, and with which I couldn’t disagree more. But if you’re right, if the United States isn’t all that special — if it can’t be relied upon as the chief champion of liberal democracy — then the world doesn’t stand much of a chance. Because there’s always somebody wanting to be the hegemon, and the leading candidates running to take our place are pretty much a nightmare.

ISIS is a wannabe and never-was on that score. Russia wants to be a contender again, instead of bum, Charlie. But my money has long been on the oppressive authoritarians of the world’s largest country, China.

One of the first editorials I wrote for The State — maybe the first — when I joined the editorial board in 1994 was about the disturbing signs I saw of the Chinese buying friends and influencing people right here in our hemisphere, the long-forgotten Monroe Doctrine notwithstanding. I was worried that nobody else in this country seemed to see it, thanks to the fact that few of my fellow Americans ever took a moment to think about what happens to the south of us. (Side note: We wrote a lot about international affairs when I joined the editorial board; when I became editor, we would focus far more closely on South Carolina, which needed the scrutiny.)

Well, more people have noticed it since then. But not enough people. And not enough of the ones who have noticed care. President Obama, to his credit, started his “pivot” to focus on the Pacific Rim. That was the smart thing to do for this country’s long-term interests, and those of liberal democracy in general. China needs to be countered, with both soft power and, when necessary, hard.

Probably the most chilling paragraph in Krauthammer’s column is this one:

As for China, the other great challenger to the post-Cold War order, the administration’s “pivot” has turned into an abject failure. The Philippines openly defected to the Chinese side. Malaysia then followed. And the rest of our Asian allies are beginning to hedge their bets. When the president of China addressed the Pacific Rim countries in Peru last month, he suggested that China was prepared to pick up the pieces of the Trans-Pacific Partnership, now abandoned by both political parties in the United States….

TPP was smart policy, encouraging our allies in the region to join with us in confidence, tying themselves more closely with U.S. interests in the face of the Chinese challenge. And this year, neither party was willing to stand up for it — even though one of the nominees (the one who lost, of course) knew better. If she’d been elected, at least we’d have had the chance of her breaking that bad campaign promise.

We painstakingly fashioned that strategic instrument, then dropped it like a hot potato when the populists began howling. And China is preparing to pick it up. And maybe you don’t, but I feel the Earth’s center of gravity shifting in the wrong direction.

Oh, but hey, Carrier’s not moving a plant to Mexico — at least, not completely. So everything’s OK, right? We’ve entered the era of short-term, inwardly focused international goals. Or something…

12 thoughts on “Is this really where the light of liberal democracy grows dim?”