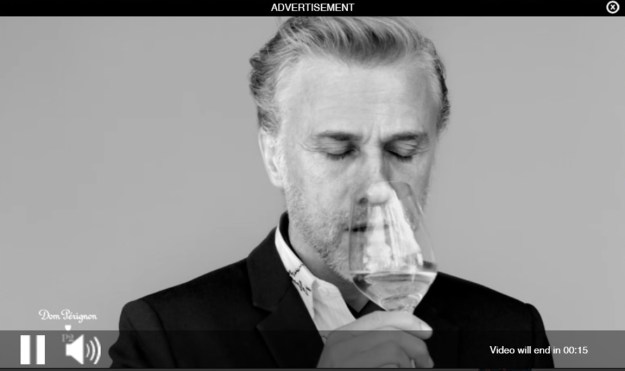 Maybe it’s envy. Maybe it’s just that I don’t have money to buy expensive gifts. Or maybe it’s that I wouldn’t buy these kinds of gifts even if I could. I’d give people something more practical. Or burn the money.

Get a load of the guy in the screengrab above. Excuse my imagery, but he looks for all the world like he’s about to have an orgasm from sticking his nose into a wineglass.

This is from a pop-up video act that forced itself upon me when I tried to read a story on the New York Times website. The video went on and on like this, in slow motion. With “Ode to Joy” as the background music, just in case the images didn’t lay it on thick enough. It all just seemed to embody perfectly everything that bugs me about the ads for jewelry and perfume and watches that cost more than my house (and what’s more pointlessly ostentatious than an expensive watch, in an age when we all carry phones that keep perfect time?) with which we are inundated this time of year.

Part of this is that I’m kind of jaded about foodie stuff. (And may that’s because I have such a limited diet, and tend to think good food is anything I can use for fuel that won’t kill me.) People make WAY too big a deal over how good a bite of food or a sip of a drink — or in this case, the smell of a drink — can be. Face it — if there’s a cake recipe that you think is better than sex, you’ve got a problem.

But there’s much, much more than that going on here. A lot of effort was put into making this guy look posh, upper-class, refined, better than you, and something to aspire to — if only you can afford and appreciate this product, you, too will be a superior being. It’s so extreme, it’s laughable. Like a Thurston Howell caricature of wealth and snobbery, only with better production values. The makers of the ad were going for the same effect I was going for in my own cheesy way with this selfie, except they weren’t kidding.

This is actually expected to appeal to… somebody. Donald Trump, maybe. He probably thinks it’s classy.

This holiday started with celebrating a poor child born in a stable. And now this.

Do y’all know what I’m saying here? If so, what’s the materialism-deifying ad you hate the most? Share, so we can heap scorn upon it.