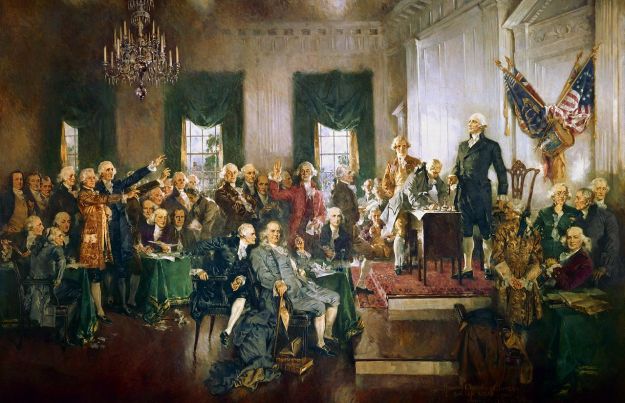 Will their checks and balances be enough?

Remember all those assurances that, thanks to our system of checks and balances, Trump wouldn’t be able to harm the country all that much?

Well, as much confidence as I place in Hamilton, Madison et al., I’ve thought that was too phlegmatic by half — a modern president can do a great deal of harm, even unto the destruction of the planet, before Congress can get its thumb out of its, um, ear.

And, over the weekend, some observers — including The Washington Post‘s duty conservative, Jennifer Rubin — were beginning to wonder whether the GOP Congress would ever develop the guts or inclination even to try to contain him.

As it happens, there were encouraging signs yesterday and this morning.

First, my two fave senators, Graham and McCain, stood up to both Trump and Putin:

Two Senate Republicans joined demands for a bipartisan probe into Russia’s suspected election interference allegedly designed to bolster Donald Trump as questions continue to mount about the president-elect’s expected decision to nominate a secretary of state candidate with close ties to Russia.

“Recent reports of Russian interference in our election should alarm every American,” the four senators said in a statement on Sunday morning. “Democrats and Republicans must work together, and across the jurisdictional lines of the Congress, to examine these recent incidents thoroughly and devise comprehensive solutions to deter and defend against further cyberattacks.”…

Of course, the headline on that story noted that the GOP leadership remained “mum” on that point.

I’m happy to note that Sen. McConnell has now been heard from:

“The Russian are not our friends,” McConnell told reporters at a scheduled year-end news conference….

This is encouraging. It doesn’t make me think things are hunky-dory, but it’s encouraging…

82 thoughts on “Is this where the GOP Congress stands up to Trump?”