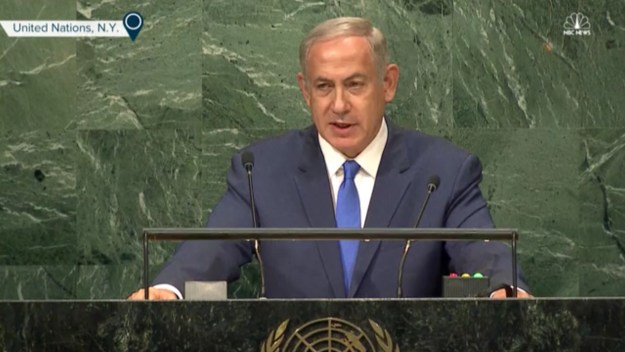 Image from NBC file footage of Netanyahu speaking at the U.N.

Like a stopped clock, Donald Trump will sometimes be right — and this might be one of those times.

Today, the outgoing Obama administration got this shot across its bow:

An Israeli official on Friday accused President Barack Obama of colluding with the Palestinians in a “shameful move against Israel at the U.N.” after learning the White House did not intend to veto a Security Council resolution condemning settlement construction in the West Bank and east Jerusalem the day before.

“President Obama and Secretary Kerry are behind this shameful move against Israel at the U.N.,” the official said. “The U.S administration secretly cooked up with the Palestinians an extreme anti-Israeli resolution behind Israel’s back which would be a tail wind for terror and boycotts and effectively make the Western Wall occupied Palestinian territory,” he said calling it “an abandonment of Israel which breaks decades of US policy of protecting Israel at the UN.”

JERUSALEM — President­-elect Donald J. Trump thrust himself into one of the world’s most polarizing debates on Thursday by pressuring President Obama to veto a United Nations resolution critical of Israel, the newly elected leader’s most direct intervention in foreign policy during his transition to power. Mr. Trump spoke out after Israeli officials contacted his team for help in blocking the draft resolution condemning settlement construction even as they lobbied its sponsor, Egypt. Within a couple of hours, Egypt withdrew the resolution, at least temporarily, and its president, Abdel Fattah el­Sisi, called Mr. Trump to discuss how “to establish true peace in the Middle East,” according to an aide to the president-­elect….

Of course, if you don’t like Trump’s current position, wait five minutes. But for now, I think he’s calling for the right response.

Look, folks: I think to a great extent those settlements are problematic, a provocation. But this is no way for Israel’s adversaries to try to cram through a resolution on the subject — two days before Christmas and in the midst of a uniquely unsettling presidential transition in this country. Note that I’m talking here about the United States. Why? Because I think a move like this is meant to take advantage of this country as much as it is meant to strike out at Israel.

First the Russians try, and one might even say succeed (if one isn’t too discriminating in discerning causes and effects), in throwing this country into disarray. Now this.

Oh, and while I’m talking foreign interference, let me say that I don’t particularly appreciate our friend Israel reaching out to Trump this way. But President Obama could certainly have avoided that desperation move by assuring Israel that he had its back.

I hope he did, in fact. I certainly hope the Israeli allegation is wrong, and that President Obama intended to veto this resolution at this time.

You know what would be nice? A clear statement from the administration to that effect. That would do much to pour oil on the waters. If anyone’s seen anything like that, let me know. I’ve been hunting for something, ANYTHING from the White House on this, and failing to find it. I’ll keep looking. (I’ve found speculation that maybe Samantha Power is quietly working to solve the problem, and perhaps that’s right. If so, ignore everything I’ve said.)

By the way, before I sign off, here’s what Lindsey Graham has to say about the situation. His release, in fact, is what alerted me to the fact that this matter, which I thought was averted yesterday, may not be over:

“This provocative action by the United Nations is an outrage and must be dealt with sternly and forcefully.

“In addition, any nation which backs this resolution and receives assistance from the United States will put that assistance in jeopardy.

“There is a reason the United States has long opposed these type efforts directed at Israel — the only way to achieve a lasting peace by the parties negotiating directly and not using the United Nations as a blunt instrument against Israel.  This was President Obama’s position in 2011 and it should be his position today.”

60 thoughts on “On this, Trump may be right and Obama may be wrong”