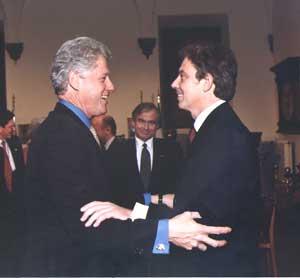 Our pal Tony has always been one to feel our pain.

Bryan calls my attention to the fact that while my main man Tony Blair is very concerned about the state of liberal democracy in Europe, he thinks his American friends will weather the Trump crisis:

WASHINGTON — Former British prime minister Tony Blair warns that political upheaval from Great Britain’s Brexit vote in June to the collapse of the Italian government on Sunday signals the most dangerous time for Western democracies in decades….

It has been a year of unexpected victories by populist and nationalistic forces that are challenging the establishment: passage of the referendum pulling Britain from the European Union, the election of Donald Trump as president in the United States, defeat of a measure in Italy that prompted the prime minister to announce his resignation.

And in the Austrian election Sunday, the candidate representing the party founded by former Nazis lost — but after commanding 46% of the vote….

“I’m less worried about America than I am about Europe; I’ll be very frank with you,” he said. “America is such a strong country and you’ve got so many checks-and-balances and you’ve got such resilience in your economy and so on; you guys will do fine, I’m sure. In Europe, we have systems that are at a point of fragility that troubles me.”…

Tony’s almost always right. Here’s hoping he is this time. Although for once, I doubt him. Rome thought it was big enough and strong enough and had checks and balances, too…