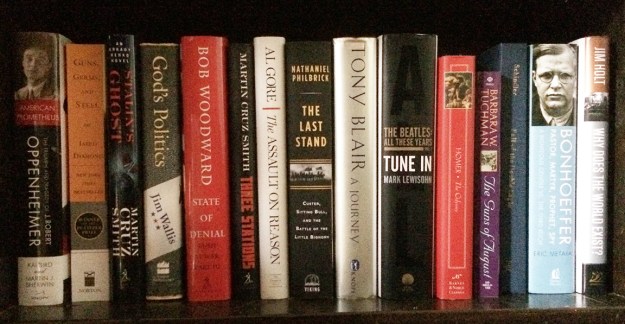 A few of the books I have either bought for myself, or received as gifts (most of those being ones I ASKED for), but have not finished reading.

Back when we were first married, my wife gave me a coffee mug that I deeply appreciated, to the extent that I never drank out of it, wanting to preserve it. It had a picture on it of a young boy sitting with his back against a tree and his nose in a book, with the caption, “The sky above and a book to love.”

That really described me as a kid, which I was touched by because she hadn’t known me then — she could just tell. That’s who I was.

Recently, I Tweeted out (with unintentional irony) an essay in the WSJ about how we all need badly to turn back to reading books:

We need to read and to be readers now more than ever.

We overschedule our days and complain constantly about being too busy. We shop endlessly for stuff we don’t need and then feel oppressed by the clutter that surrounds us. We rarely sleep well or enough. We compare our bodies to the artificial ones we see in magazines and our lives to the exaggerated ones we see on television. We watch cooking shows and then eat fast food. We worry ourselves sick and join gyms we don’t visit. We keep up with hundreds of acquaintances but rarely see our best friends. We bombard ourselves with video clips and emails and instant messages. We even interrupt our interruptions….

Books are uniquely suited to helping us change our relationship to the rhythms and habits of daily life in this world of endless connectivity. We can’t interrupt books; we can only interrupt ourselves while reading them. They are the expression of an individual or a group of individuals, not of a hive mind or collective consciousness. They speak to us, thoughtfully, one at a time. They demand our attention. And they demand that we briefly put aside our own beliefs and prejudices and listen to someone else’s. You can rant against a book, scribble in the margin or even chuck it out the window. Still, you won’t change the words on the page….

This brought to the fore one of the many perpetual guilt trips I live with: All the wonderful books I already possess — as a result of telling people I wanted them as gifts, and my loved ones acting upon that stated desire — and have not read.

Recently, I confessed that I still hadn’t read Alexander Hamilton by Ron Chernow — although I’d had it ever since Fritz Hollings insisted I must read it 12 years ago, and I put it on my wish list and received it soon after, and put it on the shelf.

Well, I’ve started it now, and have been reading it for several weeks, and it has all the ingredients of the kind of book I love — I keep stopping to read aloud good bits to my wife — and I’m all the way up to… Chapter 5. Hamilton has just joined Washington’s staff in the midst of the revolution.

Obviously, as fascinating as it is, I can put it down.

Awhile back — more than 18 months ago, I see — I confessed to y’all that while the First World War is one of those areas I really, really feel that I should learn more about, and I had started on it several months earlier and written about how awesome it was (especially that first chapter, which sets the scene), I still hadn’t finished The Guns of August.

Well, I still haven’t. I bogged down somewhere around the time that it shifted to the Eastern front (although I read enough of that to conclude that Tsar Nicholas’ government was too incompetent to run a lemonade stand, much less such a vast country).

When I mentioned that and several other things I needed to read more about at the time, some of y’all very kindly suggested some books to check out. And I was grateful, but at the back of my mind was this awful, nagging doubt that I’ll have the discipline to get around to reading them. The shelves of unread books that I really, really wanted and already possessed groaned with the combined weight of the books themselves… and my guilt.

And I was right. I still haven’t read them.

Sitting around my house and on my iPad, begun but not finished, are the Hamilton book and The Guns of August; The Art of Betrayal: The Secret History of M16 — Life and Death In the British Secret Service, by Gordon Corera; The Path Between the Seas: The Creation of the Panama Canal, 1870-1914, by David McCullough; The War for All the Oceans: From Nelson at the Nile to Napoleon at Waterloo, by Roy Adkins; Trotsky: Downfall Of A Revolutionary, by Bertrand M. Patenaude; A Tale of Two Cities; The Grapes of Wrath; and Moby Dick. That’s just off the top of my head. I’m sure there are more.

All of them, with the possible exception of the Trotsky book (I’ve officially given up on that one), started with great promise.

It’s not that I don’t read. I read — or at least skim and dig into the stories that interest me — at least three newspapers a day, plus all the many items that social media draw me to. I suspect I read more news and commentary each day than at any time during my long newspaper career — because so much is immediately available.

And it’s not that I don’t read books. I obsessively reread Patrick O’Brian’s Aubrey-Maturin novels, and occasionally some of my favorites by Nick Hornby, John le Carre (his early stuff, from The Night Manager back), Martin Cruz Smith and, yes, Tom Clancy. I can pass a pleasant moment with them and put them down, because I know that happens next. Ditto with faddish stuff from my youth, such as Dune and Stranger in a Strange Land.

And I occasionally finish a new book, the most recent being, let’s see… Ardennes 1944: The Battle of the Bulge, by Anthony Beevor. Months and months ago, I now realize.

Why can’t I seem to commit to a new book, and see it through? I suspect it’s because of a number of factors, starting with all that time spent with ephemeral stuff via iPad.

It’s other things, too. I’ve gotten so obsessed with genealogy that I actually spend huge amounts of time on the weekends building my family tree. Several months ago, I had fewer than 1,000 people on it, now I’ve more than 2,600. And just this weekend, I’ve made some surprising discoveries: For instance, one of my apparent ancestors — who rebelled against King John and was declared an outlaw — may have been one of the inspirations for the Robin Hood legend. Really. So I find it hard to tear myself away from that stuff. I’ve learned a lot about dim corners of history I did not know before, just reading context on ancestors. But that reading, so far, has seldom gone deeper than Wikipedia.

The most humiliating reason of all is that, well, there is so much compelling television these days, sucking up my leisure hours. That is something I thought I would never write, especially as a reason for neglecting books, my lifelong love. But while broadcast television (with the exception of ETV and PBS) is a more wasteful wasteland than ever (with some exceptions — I enjoy “Bluebloods,” and don’t forget “The West Wing” was on broadcast), Netflix and Amazon Prime have almost enough offerings to occupy my evenings completely. And I just can’t seem to get around to canceling HBO NOW, despite my best intentions.

Read that figure again, and think about it. It’s not a typo.

This is embarrassing. It’s actually worse than that. It’s an identity crisis. Who AM I, if I’m not reading books? Maybe the Internet has retrained my brain, making it less patient. For whatever reason, an occasional long-form magazine piece, in The New Yorker or some similar venue, is about as long as I go. And most of what I read is no longer than a newspaper column.

I don’t know what’s happened to me. But it’s disorienting. And I need to do something about it…

Some of the books I’ve lazily read and reread over the years, rather than read something new.