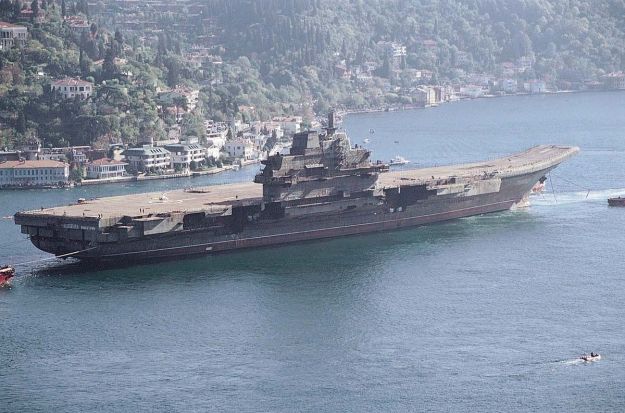 China’s one and only aircraft carrier, which they bought used./U.S. Navy

Or rather, we have state-controlled media doing so, which is a signal I think we have to take seriously:

The US risks a “large-scale war” with China if it attempts to blockade islands in the South China Sea, Chinese state media has said, adding that if recent statements become policy when Donald Trump takes over as president “the two sides had better prepare for a military clash”.

China has controversially built fortifications and artificial islands across the South China Sea. Rex Tillerson, Trump’s nominee for secretary of state, said China’s “access to those islands … is not going to be allowed”.

Tillerson did not specify how the US would block access but experts agreed it could only be done by a significant show of military force. Tillerson likened China’s island building to “Russia’s taking of Crimea”.

“Tillerson had better bone up on nuclear power strategies if he wants to force a big nuclear power to withdraw from its own territories,” said an editorial in the Global Times, a Communist-party controlled newspaper….

I’m not disagreeing with anything Tillerson said, mind you — and it’s not all that different from the policy followed by the Obama administration — but the current situation is fraught.

On a previous post about Nikki Haley, Phillip Bush said:

That’s going to be a tough job, representing the views of the United States to the United Nations and the world when your own Administration is going to be one squabbling, Tweeting, contradictory, capricious, incoherent mess, especially on foreign policy. Her greatest challenge will come not from fellow delegates at the UN or on the Security Council, but trying to sort out and gracefully convey the day-to-day contradictions emanating from the government she is appointed to represent….

One of the main narratives of this week has been that Trump’s nominees are not toeing the Trump line, particularly on foreign policy. Which in one way is encouraging (the nominees’ take is usually far wiser and better-informed), but in another way can lead to chaotic, incoherent policy, an unstable situation in which an unstable personality (hint, hint) can trigger an international crisis, perhaps even war, with a phone call — or a Tweet.

I have little doubt that Nikki Haley will conduct herself “gracefully,” but I do worry quite a bit about a diplomatic novice representing us on the Security Council without expert supervision and direction. That said, in a crisis, Nikki would be the least of my worries. And of course, the new POTUS would be my greatest.

What if, sometime after next Friday, Chinese state media issues a blustering threat like that, and includes some less-than-flattering reflections on Trump himself? How do you suppose he’ll react? And who will be able to contain him? And will they be in time?

65 thoughts on “And now, we have China threatening ‘a large-scale war’”