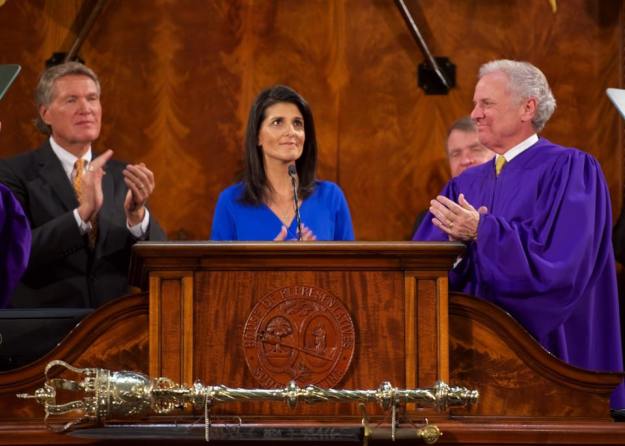 CAVEAT: When I wrote this post I had missed something important in the governor’s speech, something that had come during the part I missed. It has bearing on the points I make in the post, and here it is.

I had a Community Relations Council meeting last night, so I only heard the very last part of Nikki Haley’s last State of the State on the radio driving home.

It sounded fine, as fond farewells go. I was a little disappointed by one thing. I heard her talking in a roundabout, indirect way about getting the Confederate flag down:

But above all, I will remember how the good people of South Carolina responded to those tragedies, with love and generosity and compassion, and what that has meant for our state.

I spoke earlier of my dear desire to see the image of South Carolina changed for the better. Standing here tonight, I can say with every confidence that it has happened, that that desire has been fulfilled.

But not because of me. The people of South Carolina accomplished the highest aspiration I had for our state all on their own.

They did it by showing the entire world what love and acceptance looks like. They did it by displaying for all to see the power of faith, of kindness, and of forgiveness. They did it by stepping up to every challenge, through every tragedy, every time.

But I wish she’d spoken about it more directly. When I got a copy of her speech later, I found that it only contained the word “flag” once, and that was in reference to the Clemson flag she and her daughter had hoisted over the State House earlier this week. (NOTE: This counts officially as a sports reference, and fulfills the weekly quota! So if y’all want to talk about that football game the other night, here’s a place for you to do it.)

Which disappointed me. Why? Because I think getting that other flag down was her defining moment, the one when she became the leader of South Carolina, and led us to where our lawmakers had refused for too long to go.

Did you see Obama’s farewell speech the other night? He mentioned getting bin Laden, didn’t he? Of course he did. That’s when he made his bones as commander-in-chief. Well, the flag was when Nikki made hers, only as leader of a mature, rational state where people may not forget, but they forgive, and care about each other.

Yeah, I get that she wanted her speech to be sweetness and light, and didn’t want to say anything that stirred ill feeling — and there are those who resent taking down the flag, although they’ve mostly been fairly quiet. And it seems safe to assume there’s a bit of a correlation between those folks and the set that voted for her soon-to-be boss.

But that was her proudest moment. I think it’s easy for people to downplay her role, but I’m telling you, I’ve known too many governors who didn’t want to touch that flag, or even talk about it. And I’ve known others who started to do something, but backed away, or accepted a “compromise” that settled nothing — because they saw that as the best they could get out of our Legislature. And maybe they were right, at the time.

But the thing that Nikki did was recognize the moment when it came, and seize it without hesitation. (That’s a huge part of leadership — recognizing when people are ready to be led. One of the secrets of Lincoln’s extraordinary achievements was his uncanny ability to see exactly when he could lead the country to do things it had always refused to do before.)

It was a moment in which the whole state was in shock and morning. And there were those who protested that this wasn’t the time to act, before the dead had even been buried. But sometimes that exactly when one must act, because later would be much too late.

When she stood up and said, essentially, Let’s not let this summer pass without getting that flag down for good — no fooling around, no compromises, that made all the difference. It made what had been impossible possible, and made it happen.

So if she’d wanted to speak to that directly, I’d have applauded. Because I’m proud of her for that.

She didn’t have to brag or anything. She could have stuck to her theme of “I didn’t do it; y’all did.” And that’s true, in the sense that our state was ready to be led there. But without someone strenuously pushing it through the Legislature, it wouldn’t have happened.

I’ll close with that video my son did after the first anti-flag rally after the shootings, the one I did the voiceover on. It testifies to a mood sweeping through our state. But I still said, it took what Nikki did to translate that into action…

27 thoughts on “Did y’all watch Nikki’s State of the State? Thoughts?”