Some excerpts from Lindsey Graham’s appearance on “Meet the Press” on Sunday:

All I’m asking [President-elect Trump] is to acknowledge that Russia interfered [in our election] and push back. It could be Iran next time, it could be China. It was Democrats today, it could be Republicans in the next election….

Our lives are built around the idea that we’re free people, that we go to the ballot box, that we have political contests outside of foreign interference. You can’t go on with your life as a democracy when a foreign entity is trying to compromise the election process. So Mr. President-elect, it is very important that you show leadership here….

We should all – Republicans and Democrats – condemn Russia for what they did. To my Republican friends who are gleeful: you’re making a huge mistake. When WikiLeaks released information during the Bush years about the Iraq War that was embarrassing to the administration, that put our troops at risk, most Democrats condemned it, some celebrated it. Most Republicans are condemning what Russia did, and to those who are gleeful about it, you’re a political hack. You’re not a Republican, you’re not a patriot. If this is not about us, then I’ll never know what will be about us. Because when one party is compromised, all of us are compromised…. 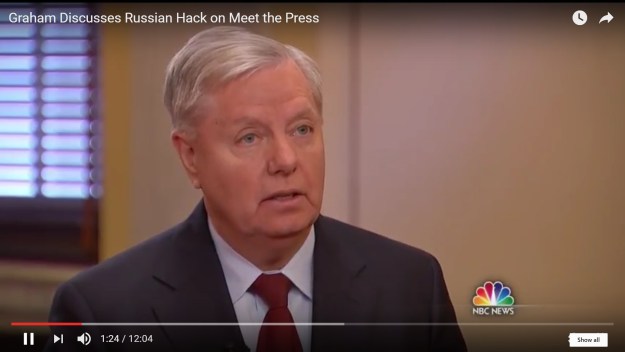 25 thoughts on “Graham to any Republican who discounts Russian actions: “You are a political hack.””