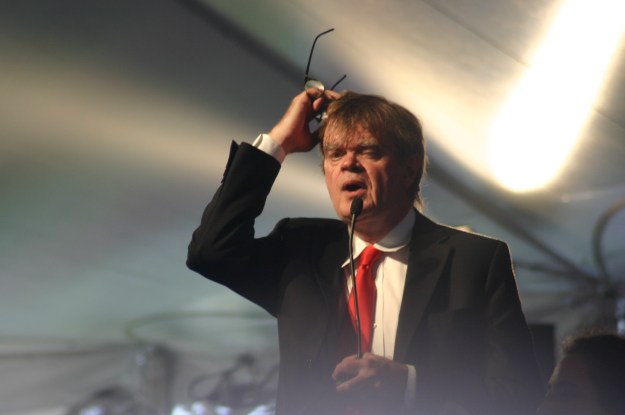 Saturday, the radio in our kitchen was on at 6 p.m., and when “Prairie Home Companion” came on… we turned it off.

Instead of turning it up, which is what we usually would have done, ever since we started listening to it out in Kansas in the ’80s.

It’s just not the same without Garrison Keillor. That deep, mellifluous, soothing voice, speaking of things that prompted nostalgia and peaceful reflection on the human condition, was what the show was about. I appreciated that the new guy made a joke in the first show about his high, piping voice, but you know, after a bit it’s not funny. I’ve lost my reason to listen.

Keillor is still writing. But frankly, I’ve never liked his writing quite as much on a page or screen — I prefer to hear him say it. Also, his unspoken stuff tends to be more political, and he’s such a doctrinaire liberal that a lot of stuff he says is a bit off-putting to me.

But… I find that if I can imagine him reading it, I’m fine with it. And this latest piece in The Washington Post yesterday made it very easy to hear the voice. It was gentle, it was kind, it was reassuring, unassuming and forgiving. And when you write in a voice like that, I can handle pretty much anything you have to say. An excerpt:

Face it, Southerners are nicer people

I’ve been down in South Carolina and Georgia, an old Northern liberal in red states, enjoying a climate like April in January and the hospitality of gracious, soft-spoken people, many of whom voted for He Who Does Not Need Intelligence, but they didn’t bring it up, so neither did I.

I walked into Jestine’s Kitchen in Charleston, and a waitress said, “Is there just one of you, sweetheart?” and her voice was like jasmine and teaberry. There was just one of me, though I wished there were two and she was the other one. She showed me to a table — “Have a seat, sweetheart, I’ll be right with you.” Liberal waitpersons up north would no more call you “sweetheart” than they would kiss you on the lips, and if you called one of them “sweetheart” she might hand you your hat. I ordered the fried chicken with collard greens and mashed potatoes and gravy and read a front-page story in the Charleston Post and Courier about a Republican state legislator charged with a felony for allegedly beating his wife in front of their weeping children, and then the waitress brought the food and I dug in and it was luminous, redemptive, all that chicken and gravy could be. If this is what Makes America Great Again, I am all for it….

I thought to myself, “A person could live in a town like this.” I’ve spent time with people whose politics agreed with mine and who were cold fish indeed and now that I’m elderly and have time on my hands, maybe I’d enjoy hanging out with amiable sweet-talking right-wingers. I’m just saying….

Indeed. And I miss hanging out with him on Saturday evenings…

(It’s fun when Yankees find us so captivating. Reminds me of the one year I lived above the Mason-Dixon line growing up. I attended second grade in Woodbury, NJ. I read more fluently than most 2nd-graders, and once a teacher heard me read aloud, she started lending me to other classes to read to the kids. I was happy to oblige. They thought my accent was so charming. They looked upon me as a pint-sized Ashley Wilkes, and that kind of thing can make a certain sort of Yankee lady just swoon.)

29 thoughts on “I miss Garrison Keillor”