Forget dumping TPP, “alternative facts,” threats to bring back torture, the Wall, the admiration for Putin, “grab her by the p___y,” Alicia Machado and all the rest.

Try to imagine that up to now, Donald Trump has acted like a perfectly normal, grounded, mature human being.

This one interview would be enough to make you say, “This guy’s lost it!”

The way President Trump tells it, the meandering, falsehood-filled, self-involved speech that he gave at the Central Intelligence Agency headquarters was one of the greatest addresses ever given.

The most powerful man in the world continued: “You probably ran it live. I know when I do good speeches. I know when I do bad speeches. That speech was a total home run. They loved it. … People loved it. They loved it. They gave me a standing ovation for a long period of time. They never even sat down, most of them, during the speech. There was love in the room. You and other networks covered it very inaccurately. … That speech was a good speech. And you and a couple of other networks tried to downplay that speech. And it was very, very unfortunate that you did.”…

It’s like he was trying to outdo Alexandra Petri’s satirical column (“The true, correct story of what happened at Donald Trump’s inauguration“) spoofing how awesome Trump thinks his inauguration was.

Soon, it will become impossible to lampoon him, as nothing satirists will be able to dream up will exceed the things he actually says.

Seriously, who talks like this? If you’d never heard of the guy, and heard him talking this way about himself, you’d start to steadily back away, trying to make no sudden moves… 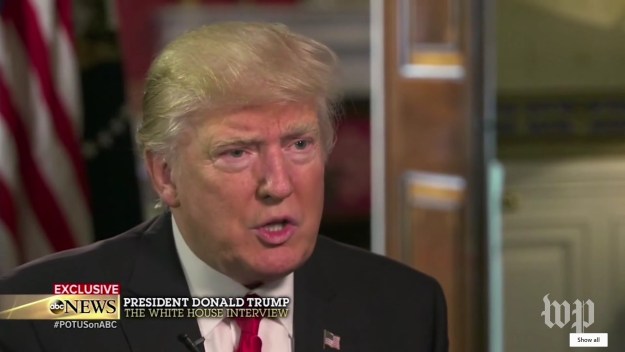 63 thoughts on “If we had nothing else, this one small thing would show how unhinged Trump is”