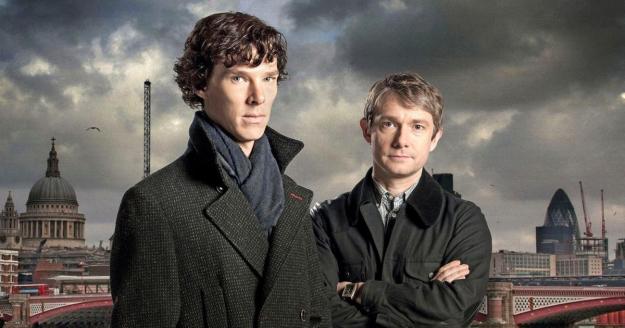 The series started out promisingly enough.

In the first season, I found “Sherlock” fun, clever and refreshing.

Normally, I look askance at efforts to “update” perfectly good stories, unless they are exceedingly well done. For instance, give me Franco Zeffirelli’s temporally faithful 1968 version of “Romeo and Juliet” with the perfect casting of Olivia Hussey as Juliet (a girl actually almost young enough for the part — and what young Romeo would not have fallen for her?), not the execrable (right down to the title) “Romeo + Juliet” of 1996.

On the other hand, give me Ethan Hawke’s brooding young updated “Hamlet,” with his usurping uncle being the head of “Denmark Corporation,” over the versions with the absurdly ancient Kenneth Branagh (36) or Mel Gibson (34) in the title role. OK, Hawke was 30, but didn’t look it. And his characters’ obsession with shooting avant-garde video of himself and the other characters worked perfectly with Hamlet’s introspection.

Despite what I say about Branagh and Gibson, I can even overlook demographically creative casting, such as the Nigerian-Jewish Sophie Okonedo in the recent “The Hollow Crown: The Wars of the Roses”… when they pull it off. I thought she was scary good as Margaret of Anjou.

But enough Shakespeare; back to my topic… At the outset, I thought the “Sherlock” update worked. The folks who made it did fun things with Sherlock’s use of his smartphone and Watson’s blog, and the Guy-Ritchie-style cinematographic gimmicks were more fun than distracting.

The early episodes, from “A Study in Pink” through “A Scandal in Belgravia,” are true to the essence of the Holmes canon (and sometimes even to the letter — I was startled, when I went back and read “A Study in Scarlet,” that the original Watson actually was an Army doctor trying to get over his experiences in Afghanistan), while introducing 21st-century elements that work, and freshen up the formula. And as the story wore on, I was delighted with the wonderfully idiosyncratic Moriarty created by Andrew Scott.

But then… the writers of the show started running out of legitimate ideas. This was fully evident in the first episode of the third season, with the explanation of how Benedict Cumberbatch’s Sherlock wasn’t really dead. Something was just… off about it.

This offness really went over the Reichenbach Falls when we learned Mary Morstan’s big secret. That, as much as anything, was the moment when the shark looked up and saw the Fonz’s motorcycle flying over the tank.

This was insulting to the plot, to the characters and to viewers’ intelligence for a number of reasons, such as:

Yeah, I realize I’m running up against the feminist imperative here. The original Mary Morstan, in the Arthur Conan Doyle stories, was a realistic young woman of her era, a former governess, a damsel in distress very much in need of our heroes’ aid. And feminists hate that kind of character, which means the entertainment industry hates that kind of character. So she becomes a superwoman. And ta-da!, the men are no longer driving the action.

Fine. But make it semi-believable. Make the next Luke Skywalker a girl rather than a boy, but make it work (all things are possible with the Force). Sell it to me. I fully believed in the deadliness of the original “La Femme Nikita.” That worked. But stop and think a bit before you do it. I wouldn’t believe Watson as some sort of super double-naught spy/assassin. So why do you think it works with his wife?

But this wildly unbelievable Mary Morstan isn’t the problem — she’s just a dramatic illustration of the problem.

The problem is perfectly seen in the moment, in the new episode aired Sunday after months of hype, when a group of super-assassins dressed like ninjas (one of them being Mary, by the way, although that’s not important to my point), come rappelling down from the rafters into a hostage situation, spraying automatic-rifle fire in all directions.

Yes, there was violence in the original Holmes stories. This sort of violence: As they hastily left the flat on Baker Street in response to the game being afoot, Holmes would suggest Watson slip his ancient revolver into the pocket of his mac, just in case — a revolver Watson would produce and train on the villain in the denouement, causing the baddie to become completely passive while Holmes explains how he figured it all out.

The “action” was civilized and human-scale. It was about what went on in Holmes’ head, not “Fast and Furious”-style whizbang.

In other words, more Smiley than Bond.

The makers of “Sherlock” seemed to understand that at first. Then they lost their way… 17 thoughts on “‘Sherlock’ jumped the shark some time back”