The news was buried deep inside the paper.

To someone who grew up in the ’60s, that headline (“The Last Man to Walk on the Moon”) sounds like the title of a dystopian science fiction novel — set in some future several centuries hence in which we’ve rendered the moon even less habitable than it is now, perhaps with radioactivity from the Second Great Interplanetary War. 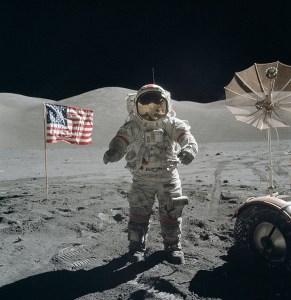 Cernan on the moon.

But neither Heinlein nor Herbert nor Asimov nor Bradbury nor the rest could have imagined a future in which, in the near year 2017, we’d be looking back to the last trip to the moon as a thing that happened more than 40 years ago. (OK, maybe one of them did imagine something like that and I missed it. But it would have been a betrayal of the genre. In their stories, bad things might happen out there, but at least we would be there.)

When I was a kid, going to the moon was this super-exciting thing we were going to do in the future, as a necessary step before venturing to Mars and beyond. And now, it’s so far in the past it’s shocking.

Over the weekend, something caused me to think of “the Space Age,” and I was saddened to think of it as a thing in the now-distant past. We had thought we were on the leading edge of something that would last for the rest of human existence. Space travel would soon be like air travel — “2001” told us so!

Instead, after a few flights to the moon, we went backward. We pulled back to boring orbital flight, never again to leave our own backyard. And then we went back further, to where we no longer have the capability to send a man into orbit — astronauts have to catch a ride with the Russians. You know, the people we beat in the Space Race.

Astronauts are now like hobos, riding the rails when they get the chance.

Perhaps we Americans, we humans for that matter, are like the English after Spain discovered the New World — they waited well over a century before sending people to live there. (But if that’s the case, who is Spain, or Portugal?) So maybe someday, long after my generation is gone…

Anyway, those are the kinds of thought I have upon reading this, buried deep inside the paper today:

Astronaut Gene Cernan traced his only child’s initials in the dust of the lunar surface. Then he climbed into the lunar module for the ride home, becoming the last person to walk on the moon….

“Those steps up that ladder, they were tough to make,” Cernan recalled in a 2007 oral history. “I didn’t want to go up. I wanted to stay a while.”

His family said his devotion to lunar exploration never waned, even in the final year of his life. Cernan died Monday at age 82 at a Houston hospital following ongoing heath issues, family spokeswoman Melissa Wren told The Associated Press….

On Dec. 14, 1972, Cernan became the last of only a dozen men to walk on the moon. Cernan called it “perhaps the brightest moment of my life. … It’s like you would want to freeze that moment and take it home with you. But you can’t.”…

When he took those steps up that ladder to leave the moon and never return, so did his nation, his species.

And he was not happy about that.

Now, all our space heroes are dying of old age.

In the ’60s, during the Space Age, we were fired up with energy to meet the challenge that an inspirational president had set for us. I still get goosebumps:

Now, this week, as Astronaut Cernan was breathing his last, our nation prepared to inaugurate… President Trump, whose great aspiration for our country is to build a wall to keep the Mexicans out.

How far we have fallen from the moon, from the stars…