I’ve mentioned before how much I enjoy, in building my family tree, finding ancestors with fun nicknames, such as “Strongbow,” and “Horse-Swapping Billy Smith” and “Shaggy-Breeches.”

The very best sobriquets are the medieval ones — just the best, terrific, believe me. They’re just so… direct. For instance, I am descended from the following: Charles the Fat, Charles the Bald, Charles the Hammer, Charles the Beloved and Charles the Wise. And that’s just the Charleses. (All are direct ancestors except the Fat, who is just a cousin, but I couldn’t leave him out.)

Take that current obsession and combine it with my enjoyment of such TV shows as “Vikings” and “The Last Kingdom,” and you just know that I would love this Twitter parody, “Donaeld the Unready“: 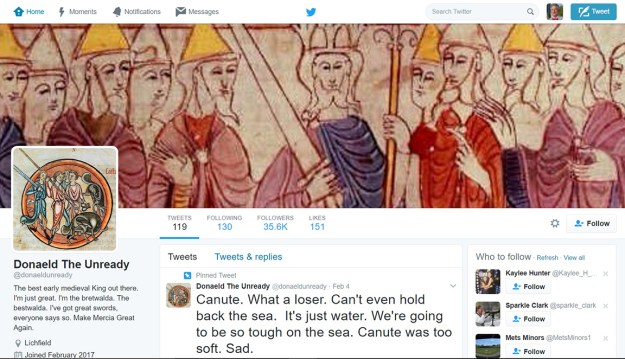 As you can see, Donaeld is “The best early medieval King out there. I’m just great. I’m the bretwalda. The bestwalda. I’ve got great swords, everyone says so. Make Mercia Great Again.”

Some of his recent Tweets:

Canute. What a loser. Can’t even hold back the sea. It’s just water. We’re going to be so tough on the sea. Canute was too soft. Sad.

Some people say we should get the Frisians in to help DRAIN THE FENS. NO WAY. Frisians part of the problem. Think, people. Trust me.

The threat from radical Vikings is real! I’ve banned all longships until we can find out what is going on! No dragonheads here! #mmga

Don’t read the Anglo-Saxon Chronicle. It’s a rag. No wonder it’s struggling. We are just having a few technical issues with our torches

Mainstream Bards won’t shut up about Danish hacking. Sure they hack, they’ve got axes. But we should focus on the future. Gonna be great.

4 thoughts on “All hail Donaeld the Unready, King of Mercia!”