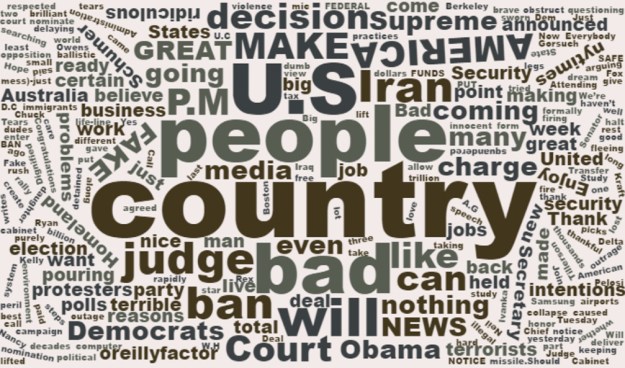 A word cloud of Trump’s Tweets from the past week.

E.J. Dionne’s latest column (“The issues all Trump foes can agree on“) reminds me of a thought that’s run through my head a few times in recent weeks, but which I’ve neglected to write about. Here’s the pertinent part of the column (but I recommend you go read the whole thing):

And Trump’s critics don’t have to agree on a single policy to bemoan his crude and sloppy use of language and to see this as a genuine obstacle to honorable politics and a well-functioning government. He doesn’t just want to repeal the Johnson Amendment, which bars religious organizations from getting involved in elections. He wants to “destroy” it. He lightly threatens war with Mexico to go after “bad hombres” and undermines our relationship with Australia by recklessly accusing one of our very closest friends of wanting to export the “next Boston bombers.”

And just this weekend, Trump showed his disrespect for the rule of law by denouncing the “so-called judge” who blocked his administration’s travel ban. In an interview for broadcast Sunday, Fox News’s Bill O’Reilly described Vladimir Putin as a “killer,” and Trump astonishingly but off-handedly replied: “Well, you think our country is so innocent?”

As George Orwell taught us, how people talk offers a clue about how they think and what they value. Our language, he wrote, “becomes ugly and inaccurate because our thoughts are foolish, but the slovenliness of our language makes it easier for us to have foolish thoughts.” He added: “If thought corrupts language, language can also corrupt thought.”

Pretending that there is something “brilliant” or “populist” about how Trump communicates is one of the worst forms of elitism because it demeans ordinary citizens who have always appreciated eloquence, as our greatest leaders knew. And please don’t compare George W. Bush to Trump on this score. We poked fun at Bush’s ability to mangle sentences, but he respected the need to find words that could move and unite the nation….

Some of my friends still have trouble getting just what is so awful about Trump. And while the correlation is far from perfect, I’ve noticed that there’s something of a tendency for such folks to be more number people than word people.

Maybe that’s totally off-base, but it seems a handy way of explaining a phenomenon that has amazed me from the moment last year when Trump started winning primaries. All this time, I’ve thought:

How could anybody possibly consider a guy who talks like that for any sort of leadership position, much less president of the United States?

It’s not just what he says, although he says some pretty awful things. It’s the way he says them. The man’s a Wharton graduate, but he communicates like someone who never made it to high school — and probably didn’t do too well in English in the lower grades, either.

Being a skilled and subtle communicator is so obviously a prerequisite for the presidency that it’s tough for me to understand how anyone could even take the first step toward considering him, given the way he expresses himself. Just watch five minutes of him in those early debates, and you’d immediately put him in the “unqualified” bin, regardless of what he was talking about at the time.

But I’m a word guy. Not everyone is. And those who aren’t are likely not only to dismiss what I’m saying as rank snobbishness, but to toss it out as irrelevant.

And maybe my analysis is completely off. But there is some reason why there’s such a gulf — nay, an ocean — between me and people who could ever have contemplated voting for Trump.

121 thoughts on “Do you have to be a word person to see what’s wrong with Trump?”