If you’d like to soothe your jangled nerves with an interesting intellectual take on WTF just happened to America, you might want to read this piece in Foreign Affairs by Walter Russell Mead, Columbia native and “radical centrist.” 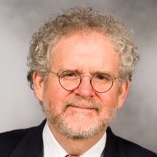 Here’s the short version: We Hamiltonians and Wilsonians (going by Mead’s descriptions, I’m kind of both, which is unsurprising) have pretty much defined America’s prevailing values and role in the world for the past 70 years. We thought this was the natural, proper order of things, and the way everything was trending as well. But while we were thinking globally and in terms of universal principles, there was… I suppose one would call it discontent… at home. The Jeffersonians (a category that includes Rand Paul and Ted Cruz, which clues you in that I’m not one of them) thought this was a wave they could ride to power, but they reckoned without the way the Jacksonians ran in and grabbed the nation by the throat with all the thoughtfulness and refinement of the backwoodsmen who trashed the White House after the original Jackson’s inauguration. (Some of the editorializing in that last sentence is me, not Mead. In case you wondered.)

Mead is not saying anything new, for him or anyone else — I called your attention to him when he made some of the same points more than a year ago. And I’ve spent much of the past year worrying that our country was repeating the horror of the Election of 1828, only more so.

But now that it’s happened, and now that this latter-day Jackson is trashing not just the White House, but practically every aspect of rational U.S. policy in the world, this seems like a good time for a deeper look into what has happened, and is happening.

An excerpt from Mead’s piece:

The distinctively American populism Trump espouses is rooted in the thought and culture of the country’s first populist president, Andrew Jackson. For Jacksonians—who formed the core of Trump’s passionately supportive base—the United States is not a political entity created and defined by a set of intellectual propositions rooted in the Enlightenment and oriented toward the fulfillment of a universal mission. Rather, it is the nation-state of the American people, and its chief business lies at home. Jacksonians see American exceptionalism not as a function of the universal appeal of American ideas, or even as a function of a unique American vocation to transform the world, but rather as rooted in the country’s singular commitment to the equality and dignity of individual American citizens. The role of the U.S. government, Jacksonians believe, is to fulfill the country’s destiny by looking after the physical security and economic well-being of the American people in their national home—and to do that while interfering as little as possible with the individual freedom that makes the country unique.

Jacksonian populism is only intermittently concerned with foreign policy, and indeed it is only intermittently engaged with politics more generally. It took a particular combination of forces and trends to mobilize it this election cycle, and most of those were domestically focused. In seeking to explain the Jacksonian surge, commentators have looked to factors such as wage stagnation, the loss of good jobs for unskilled workers, the hollowing out of civic life, a rise in drug use—conditions many associate with life in blighted inner cities that have spread across much of the country. But this is a partial and incomplete view. Identity and culture have historically played a major role in American politics, and 2016 was no exception. Jacksonian America felt itself to be under siege, with its values under attack and its future under threat. Trump—flawed as many Jacksonians themselves believed him to be—seemed the only candidate willing to help fight for its survival….

As you can see, his tones are measured as he describes this resurgence of anti-intellectualism in our politics. That’s what I’m talking about when I say you may find reading the piece soothing. Then again, maybe you won’t… 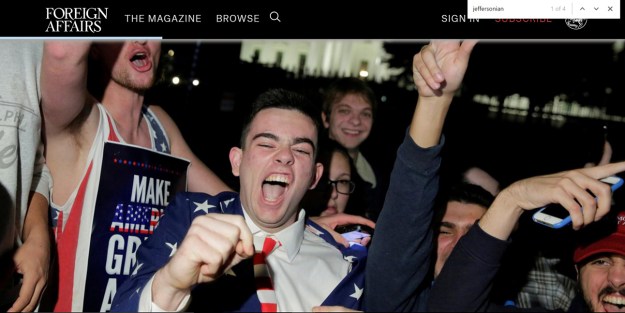 Mead writes politely of the Jacksonians, but Foreign Affairs paired his piece with this image of them celebrating on Election Night. Even I’m nicer to them than that…