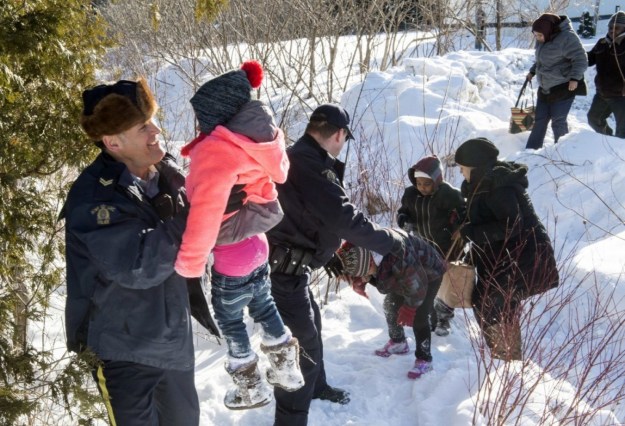 From The Washington Post: Members of the Royal Canadian Mounted Police help a family from Somalia on Feb. 17, 2017 along the U.S.-Canada border near Hemmingford, Quebec. (The Canadian Press/AP)

I hope The Canadian Press (or the AP, which transmitted it) doesn’t mind my showing this photo, but my post would make little sense without it. It goes with this story this morning in The Washington Post:

OTTAWA — As desperate asylum seekers continue to flee the Trump administration’s immigration crackdown by crossing into Canada, concern is growing here over whether the country will be able to cope if the number of migrants keeps growing.

Stories of migrants hauling children and suitcases across frozen fields and snow-covered ditches into Canada have become headline news. The asylum seekers, who are fleeing President Trump’s travel and refugee bans as well as stepped-up arrests of undocumented immigrants, have received warm welcomes. But opposition politicians are criticizing the government of Justin Trudeau for being too harsh or too lax in its approach….

I just love that expression on the Mountie’s face as he lifts that child up from the snow. You go, Dudley Do-Right!

It’s particularly meaningful to me because our church sponsored a Somali Bantu family — a widowed mother and several children — in Columbia a few years back, and my wife played a leadership role in that, sometimes spending practically as much time with them, helping them negotiate American life, as she did at home. Or so it seemed to me, but I’m not complaining. She found the mother a job and helped her get settled in it, tutored one of the kids (using our old copies of The Wall Street Journal to help with his English skills), and all sorts of stuff like that. (My own involvement hardly extended beyond storing donated furniture in our garage before they arrived.)

Eventually, our Bantu family moved to Buffalo, where a lot of others like them had ended up. Also right on the Canadian border, you’ll note — although the picture taken above was far from there.

Of course, as I say, I love the picture. Despite the fact that it saddens me greatly that any of these folks would feel so unwelcome in this country that they would set out on such hazardous (and to them especially, horrendously cold) terrain in search of solace and safety…

59 thoughts on “I love this picture from the Canadian border”