Editor’s note: I wrote most of this early in the week, and never quite finished or posted it. So it may seem a bit dated, but here you go:

I saw the second Sean Spicer skit on SNL over the weekend, and it was funny. But I found myself wondering, OK, I get why they did this gag once. Spicer was way over the top in that first performance on Saturday, Jan. 21. It was a bizarre situation, with Trump sending him out with specific orders to go on the attack with a bunch of silly, obvious lies. But is he still like that? Hasn’t he calmed down?

In other words, is this not overkill? Is the joke still relevant?

Well, how would I know? I work. How would I know what the daily press briefings are like? I’m not one of these people who does nothing but watch cable TV all day (or ever, these days).

So I went back and watched one. And I saw the problem.

If only the actuality was like what Melissa McCarthy was doing. That might be fun to watch. The real thing is not. It’s painful.

… Q    Earlier this week.  You say the — this is in context of Nordstrom and not about what she was counseled about, but about something she said to CNN earlier this week, is that the President doesn’t comment on everything.  And so I want to contrast the President’s repeated statements about Nordstrom with the lack of comments about some other things, including, for example, the attack on a Quebec mosque and other similar environments.  Why is the President — when he chooses to —

MR. SPICER:  Do you — hold on — because you just brought that up.  I literally stand at this podium and opened a briefing a couple days ago about the President expressing his condolences.  I literally opened the briefing about it.  So for you to sit there and say —

MR. SPICER:  I know.  So why are you asking why he didn’t do it when I literally stood here and did it?

Q    Kellyanne’s comments were about that the President doesn’t have time to tweet about everything.

Q    He’s tweeting about this.

Q    He’s not tweeting about something else.

MR. SPICER:  I came out here and actually spoke about it and said the President spoke —

MR. SPICER:  What are you — you’re equating me addressing the nation here and a tweet?  I don’t — that’s the silliest thing I’ve ever heard.

Q    I’m talking about an attack on Nordstrom on —

Q    Does that not diminish the language that you’re using?

MR. SPICER:  Thank you.  Go ahead [to another reporter]… 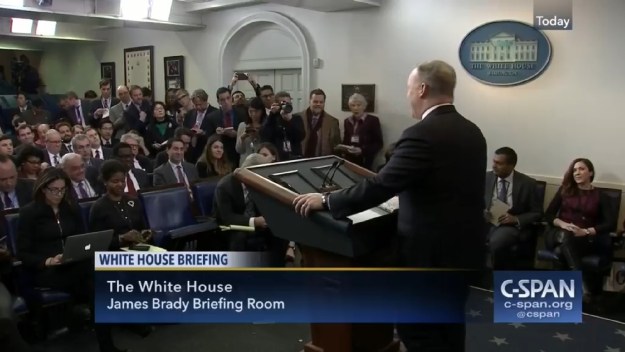 It’s not exciting; it’s not funny like throwing a big wad of half-chewed gum across the room, but the very unfunny alienation comes across. So is the fact that there is little communication going on.

The bits where he dismisses reporters with undisguised irritation (“Okay, I’m done.  This is silly.  Okay, next…”) are very uncomfortable to watch. Although maybe the weirdness of the interactions is not as noticeable unless you’ve been  journalist. And of course, if you’re a Trump supporter, this undercurrent of hostility and alienation is just what you want to see. You don’t want to see a professional interaction. You want to see someone giving journalists a hard time.

But if you’re someone who cares about having functional politics, it’s distressing. Government can’t work this way. Trump may think he’s the Tweeter of the world, but bottom line, most people are going to get most of their information about this administration, directly or indirectly, from the people in that room. It helps everybody to have a smooth dialogue going.

And I invite Trumpistas and others who take a dim view of the press to note that the demeanor of the reporters asking questions does not match the stereotype of the howling mob — and is generally more respectful of Spicer than he is of them.

Television has created a misleading impression. A reporter spends a long, frustrating day trying to get a certain question answered. Maybe a lot of that day has has involved trying to get various people on a cell phone while standing in a mob of other frustrated media types. Then, suddenly, the person who can answer the question — possibly the only person on the planet who can answer it — gets out of a car in front of the reporters and walks in into a building, which means you have maybe three or four seconds to get your question answered, and you know that odds are against your even being heard. So yeah, you very urgently and insistently call out your question, desperately trying to be heard over the rest of the gaggle.

And those two seconds when you’re calling out the question, and your competitors are calling out theirs, is all that people who only get their news from television (which they shouldn’t) will see of you trying, against the odds, to do your job.

I’ve had thousands of interactions with newsmakers over the years, and can count on two hands the number of times things got unruly. (Of course, most of that time I was an editor, not a reporter.)

But all that aside — for all my interactions, I’ve only attended a White House press briefing once. But it was at a pretty tense time for the press secretary. It was in 1998. I had gone to Washington to talk to Strom Thurmond in person and try to get an impression of his mental state, since he was declining to meet with our board in that election year. (Yeah, newspapers had money to do stuff like that then.)  And since a South Carolinian, Mike McCurry, was Clinton’s press secretary, I arranged to go by and interview him for a column. The interview was set for after the daily briefing.

On my way in from the airport, I had noted a bunch of TV news trucks outside a federal courthouse, and my cab driver — who was probably from one of those countries Trump would rather people not come from — simply explained in a heavy accent, “Monica Lewinsky.”

The scandal was at its height. And the White House press corps was in no mood for having their questions deflected. There were moments that would fulfill the stereotype of the howling mob, if one didn’t know what was at stake. At one point, the lady next to me jumped up, practically climbing over the seat in front of her, to roar, “Aw. COME ONNN, Mike!” Everyone else around me was doing something similar, but I remember her in particular.

For his part, McCurry smiled disarmingly — sort of a specialty of his — and braved his way through a session in which some of his answers were less than entirely satisfactory. Hence the yelling. 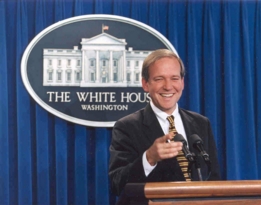 But before and after the yelling, there was a cordiality and a congeniality that stood in marked contrast to what seemed to run through that Spicer briefing on Feb. 9. At the start of the briefing there was a little ceremony for a member of McCurry’s staff who was leaving for a different job, and the reporters all applauded politely and congratulations were offered. There was real friendliness.

Republicans and other media detractors will say, “Of course it was congenial; it was a room full of liberals.”

But no — the atmosphere in that room (except during the outbreaks of yelling) was more typical of normal interactions between the media and their subjects regardless of party. Normally, there is a mutual recognition of each others’ humanity. A topic I’ve written about quite a few times.

You’ll note that even when the aggressive young woman next to me seemed like she wanted to put her hands around McCurry’s throat and throttle the truth out of him, she still called him “Mike.” Which is normal.

Whereas the interactions between Spicer and the press are not quite normal. And the weirdness seems mostly to be on his side. Of course, if I had his job, trying to sell the world on Trump’s version of events, y’all might find me acting pretty weird, too.

In the end, it’s not funny. And it’s not healthy, either…