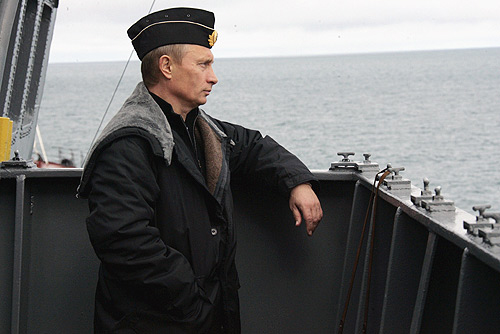 “One ping only, Vasily!” (Don’t you love when Putin plays dress-up?)

Jennifer Rubin had a column today headlined, “When will Congress take on Trump?” Something I’ve wondered myself. As she puts it:

President Trump provides neither coherent nor conservative leadership on policy. He creates foreign policy fiascoes. He has not resolved his conflicts of interest and still arguably operates in violation of the Constitution’s emoluments clause. When, irate Democrats and some Republicans plead, will Congress do something about him?

Well, I’m not saying this is enough by a long shot, but it’s a start. This is from Lindsey Graham:

WASHINGTON – A bipartisan group of Senators today introduced legislation, The Russia Sanctions Review Act of 2017, which provides for congressional oversight of any decision to provide sanctions relief to the Government of the Russian Federation.

“Russia has done nothing to be rewarded with sanctions relief,” said Senator Lindsey Graham (R-South Carolina).  “To provide relief at this time would send the wrong signal to Russia and our allies who face Russian oppression. Sanctions relief must be earned, not given.”

“If the U.S. were to provide sanctions relief to Russia without verifiable progress on the Minsk Agreements, we would lose all credibility in the eyes of our allies in Europe and around the world,” said Senator Ben Cardin (D-Maryland).  “Since the illegal annexation of Crimea and invasion of Ukraine by Russia in 2014, Congress has led efforts to impose sanctions on Russia.  We have a responsibility to exercise stringent oversight over any policy move that could ease Russia sanctions.”

“The United States should not ease sanctions on Russia until Putin abandons his illegal annexation of Crimea, verifiably and permanently ends Russian aggression in Ukraine, and fully implements the Minsk accords,” said Senator Marco Rubio (R-Florida).

“The Ukrainian community in Ohio knows firsthand the dangers of unchecked Russian aggression,” said Senator Sherrod Brown (D-Ohio). “Lifting sanctions now would only reward Russia’s attempts to undermine democracy – from Crimea and Eastern Ukraine to our own U.S. election. This commonsense, bipartisan legislation will give Congress – and more importantly, the constituents we answer to – a say in critical national security debates.”

“Easing sanctions on Russia would send the wrong message as Vladimir Putin continues to oppress his citizens, murder his political opponents, invade his neighbors, threaten America’s allies, and attempt to undermine our elections,” said Senator John McCain (R-Arizona). “Congress must have oversight of any decision that would impact our ability to hold Russia accountable for its flagrant violation of international law and attack our institutions.”

“Vladimir Putin is a thug bent on tearing down democracy—and Russia’s meddling in U.S. institutions is a threat to our national security,” said Senator Claire McCaskill (D-Missouri).“Any decision to roll over on sanctions needs to meet a high bar in Congress.”

Before sanctions relief can be granted, The Russia Sanctions Review Act requires the Administration to submit to Congress:

Ø  ordering, controlling, or otherwise directing, supporting, or financing, significant acts intended to undermine the peace, security, stability, sovereignty, or territorial integrity of Ukraine, including through an agreement between the appropriate parties; and

The U.S. Senate and House of Representatives will have 120 days to act — or decline to take action — on any proposed sanctions relief.  During this period, the President may not waive, suspend, reduce, provide relief from, or otherwise limit the application of sanctions with respect to the Russian Federation.  After 120 days, if both the Senate and House have not voted in support of a Joint Resolution of Disapproval, sanctions relief will be granted.