Yes, I realize this is likely to feel like déjà vu — this is about much the same point as this post yesterday.

But I was conversing via email with someone about that, and he shared this, so I’m going to share it with you.

Why return to the same topic? Because it’s an important one, making points that I think a lot of folks still haven’t absorbed.

Ever since Election Day — or maybe even since Trump captured the nomination — I’ve had this conversation over and over with some of you, and with others… Someone will say, “What are you so upset about? Why don’t you wait until Trump does something truly horrible, and react to that?” Which I answer with what seems to me excruciatingly obvious: He’s doing it already, every single day — with every crude lie he Tweets, with every embarrassing moment with a foreign leader, practically with every breath he takes. By being our president, he’s taking the greatest country on Earth and making it smaller, cruder, stupider, tackier — demeaning the treasure that our forebears bequeathed us.

It’s not something I can kick back and regard as normal. In fact, that would be inexcusable.

Anyway, like the one I cited yesterday, this piece captures that pretty well:

is probably too much to expect President Donald Trump to have read “Defining Deviancy Down,” the 1993 essay by the late New York Senator Daniel Patrick Moynihan. Much noted at the time, and remarkably prescient, Moynihan’s essay warned that Americans were seeing a decay in social behavior (for example, the rise in gun violence), and were becoming inured to it. To accept such deviant behavior as normal—to “normalize” it, to use a word lately in fashion—was bound to render America a less civilized society, Moynihan wrote. 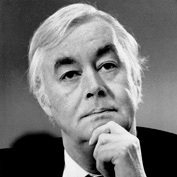 He was, of course, correct: In the quarter century since, we have accustomed ourselves to the ongoing coarsening of our society, from small things like the vitriol of Americans writing on social media and in the comments sections of news articles, to big things like our increasingly ugly political debates.

Moynihan would have turned 90 this month. Decades ago, I had the honor of serving as one of his top aides. He was in many ways Trump’s polar opposite—a self-made statesman, sociologist, political scientist and lifelong student of history, someone who had seemingly read every book in the Library of Congress. The man had a core set of principles. He insisted on factual accuracy, believed that “governing requires knowledge,” and, famously, often said, “Everyone is entitled to their own opinion, but not their own facts.” He required his staff to double- and triple-check factual assertions, and was known to include footnoted citations in his speeches and sometimes even his letters….

I like that this one cites Moynihan. I always liked that guy. Not that I ever met him or anything.

In fact, I only saw him once in person. (Warning! Brad’s about to reminisce again!) It was that time in 1998 that I mentioned recently, when I went to Washington to check on Strom Thurmond and see if he was still functioning, and also visited Mike McCurry at the White House. Anyway, as long as I was there, McCurry arranged for me to attend a ceremony in the East Room marking the 50th anniversary of NATO.

That afforded me an extra opportunity to observe Strom, as it happened. After everyone else was seated, President Clinton walked in with Strom beside him holding onto his arm. Bill walked the nation’s senior senator to his front-row seat and got him situated before heading up to the podium to speak. (We Southern boys are brought up to act that way with our elders, and I thought better of Bill for it.)

Anyway, after the event was over and most of the media folks were headed back to the West Wing, I stepped out of the door that opens into the covered portico on the northern side of the House. I stood at the top of the steps for a moment deciding whether to continue to the press room or go back in and chat with folks, and watched as cars picked up the dignitaries, there at my feet.

I nodded to Strom as he came out, and watched him negotiate the steps pretty well. But there was a guy in front of him having all sorts of trouble hobbling down to his car.

It’s a shame Moynihan didn’t take better care of himself. If he had lived to be 100 like Strom, he’d still have 10 years to go now, and we’d have the benefit of his perspective as the nation so dramatically defines its self-respect downward…

6 thoughts on “Defining the Presidency Down (what would Moynihan say?)”