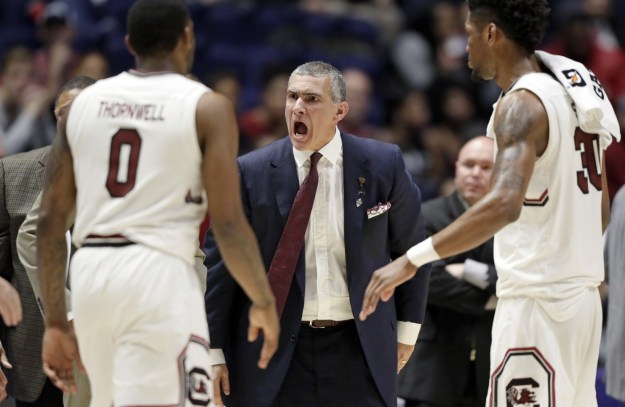 I hope Wade Payne and the Associated Press don’t mind my using this to send you to the Post story (just click on it.)

I thought some of you sports fans would enjoy this piece from The Washington Post this morning.

I like the way they portray Frank Martin as an “ogre” (although one loved by his players). I think of him as this guy who is so supportive of the S.C. Center for Fathers and Families, an ADCO client — if not exactly a teddy bear, at least a benign force.

Anyway, the story’s a good one. An excerpt:

NEW YORK — South Carolina is the closest thing to a Cinderella left in the NCAA tournament, but that ball-gown of a word is too delicate for them. There’s no dreamers in this team, they’re all brawl and substance, beginning with their rage monster of a coach Frank Martin, who seems to burst out of his suit with that terrifying tripwire temper, and looks at any moment like he’s ready to get in a fight with a pool cue….

Imagine that visage and voice coming at you. The large ogre’s jaw, topped by graying hair cut currycomb short. The eyes like an uncontrolled methane burn. You’d do what he said, too. In 2014, Martin cussed out guard Duane Notice so vehemently that his athletic director had to suspend him for a game. Yet that’s just one facet of a coach who must be acknowledged as the real thing, a masterful teacher who has gotten South Carolina to its first NCAA Sweet 16 since 1973. He has done it with force of will, superb habits instilled over five years of grinding, and largely with homegrown players. Here’s the thing about all that yelling. It works. His players do what he tells them to….