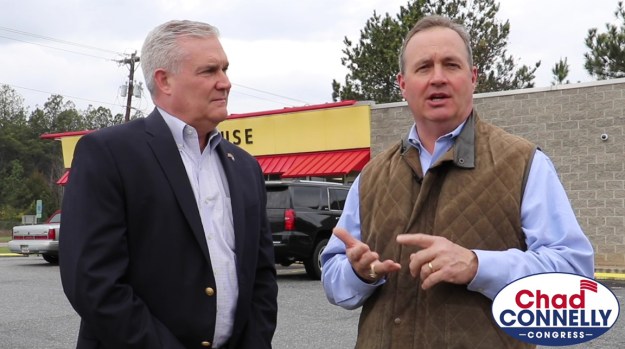 I see that Rep. Jeff Duncan has given Chad Connelly a boost — at least, I assume it constitutes a boost — in his efforts to differentiate himself from the crowd seeking the GOP nomination for Mick Mulvaney’s seat.

Duncan believes Connelly, a former chairman of the state GOP, would work with him and President Donald Trump to “drain the swamp, secure our borders, and limit government.”

There’s nothing terribly surprising that one Tea Party Class Republican would use those terms in speaking of another of his party.

I just think it’s worth noting that this is where we are now. Which means we’re a long, long way from the Trump nightmare being over.

It won’t be over, of course, until he is gone from office, and gone in a way that even his supporters are glad to see him go.

That won’t happen as long as Republicans are invoking his name and using his talking points to praise each other. (At least, the first two are Trumpisms. The third point, “limit government,” is just one of those things some Republicans say the way other people clear their throats.)

They won’t go immediately from this point to denouncing him, mind you. If and when things start to get better, the first sign will be simply tactfully neglecting to mention him. That will be promising. Then they will mildly demur. Then they will hesitantly denounce, and so forth.

The White House currently is a raging cauldron, a place that emits chaos the way a volcano emits lave. At any time, it is likely to generate the Tweet or other eruption that will be the beginning of the end.

But obviously, it’s going to be a long journey…

9 thoughts on “If GOP candidates are talking this way, it’s going to be a long time before things start getting better”