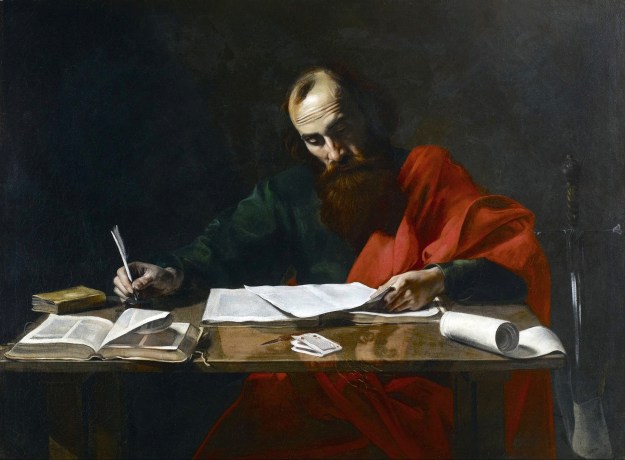 Is it blasphemous to criticize St. Paul’s writing? Probably not. It might seem a bit disrespectful to some, though, and I’m sensitive to that.

I hope those folks, and more importantly God, will forgive me if I confess something: His writing has long bugged me.

Sure, there are some nice, even beautifully poetic, passages — such as that one that is read so often at weddings. And I’ll even admit that there are brushstrokes of majesty in the verses I’m about to criticize specifically.

But I still find him on the whole rather tedious, and over-wordy. Especially some of those greetings in his epistles, which read to me sort of like “I, Paul, who will now insert multiple clauses setting out complex theological concepts adding up to an incredible number of words and making you despair of ever reaching the end of the sentence, in some cases describing myself and my own holiness, which you should emulate, but at other times describing a detailed scheme of thought for this new religion that I’m the first to write about, bring you greetings.”

I know there are a lot of important theological concepts in these passages, but when you try to cram all that into your lede, you’re going to lose your reader. I realize that as a journalist, I’m prejudiced on this score, but I don’t know another way to be. Forgive me, but sometimes I feel like maybe Paul was overthinking it, that perhaps Jesus’ teachings were more simple and direct than Paul made them out to be. I’ve always been partial to the way an atheist, Douglas Adams, described Christ’s message. To him, Jesus talked about “how great it would be to be nice to people for a change.”

Anyway, all this came back to me this past Sunday as I sat through this reading, Romans 5:12-19:

Brothers and sisters:
Through one man sin entered the world,
and through sin, death,
and thus death came to all men, inasmuch as all sinned—
for up to the time of the law, sin was in the world,
though sin is not accounted when there is no law.
But death reigned from Adam to Moses,
even over those who did not sin
after the pattern of the trespass of Adam,
who is the type of the one who was to come.
But the gift is not like the transgression.
For if by the transgression of the one, the many died,
how much more did the grace of God
and the gracious gift of the one man Jesus Christ
overflow for the many.
And the gift is not like the result of the one who sinned.
For after one sin there was the judgment that brought condemnation;
but the gift, after many transgressions, brought acquittal.
For if, by the transgression of the one,
death came to reign through that one,
how much more will those who receive the abundance of grace
and of the gift of justification
come to reign in life through the one Jesus Christ.
In conclusion, just as through one transgression
condemnation came upon all,
so, through one righteous act,
acquittal and life came to all.
For just as through the disobedience of the one man
the many were made sinners,
so, through the obedience of the one,
the many will be made righteous.

And as I followed along, reading the text as I listened, I thought, I could say this in a Tweet. And I was right. Here it is:

Through the fault of one man, Adam, sin came into the world for all. And through the goodness of one man, Jesus, abundant life came to all.

And I have one character to spare. I’m not bragging. Any reasonably competent modern editor could do it.

Sure, many modern editors have been guilty of slashing, indiscriminate violence against the language in their zeal for brevity. And I’m leaving out some important theological concepts, such as “Adam, who is the type of the one who was to come.” But I’ve communicated the main concepts, right?

No, I’m not saying we’d be better off if the Bible were just a series of Tweets. I’m too much the traditionalist for that. And I love most of the Bible. But I find Paul wearing, and I’m just saying that had he had a fairly active Twitter feed, it might have tightened up his prose some. He wouldn’t have written his epistles in 140-character bites (one hopes), but at least the practice would have gotten him into the habit of getting to the point.

Of course, the fact that he didn’t is no fault of his.

3 thoughts on “Twitter would have tightened up St. Paul’s writing”